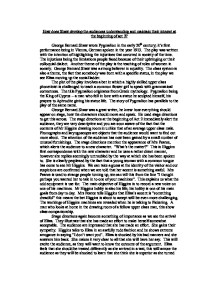 How does Shaw develop the audiences understanding and maintain their interest at the beginning of act 2?

How does Shaw develop the audiences understanding and maintain their interest at the beginning of act 2? George Bernard Shaw wrote Pygmalion in the early 20th century; it's first performance being in Vienna, German spoken in the year 1913. The play was written with the intention of highlighting the injustices that occurred in society of the time. The injustices being the limitations people faced because of their upbringing or their colloquial dialect. Another theme of the play is the teaching of roles of women in society. George Bernard Shaw was a strong believer in equality. The class system is also a theme, the fact that somebody was born with a specific status, in the play we see Eliza moving up the social ladder. The plot of the play involves a bet in which a highly skilled upper class phoneticist is challenged to teach a common flower girl to speak with grammatical correctness. The title Pygmalion originates from Greek mythology. Pygmalion being the King of Cyprus - a man who fell in love with a statue he sculpted himself, his prayers to Aphrodite giving his statue life. ...read more.

She is clearly perplexed by the fact that a young woman with a common tongue has come to see Mr Higgins. We can take a guess at the identity of the visitor and our suspicions are confirmed when we are told that her accent is something awful. Mrs Pearce is used to strange people turning up, we can tell this from the line "I thought perhaps you wanted her to talk in to one of your machines". This explains us what the odd equipment is use for. The main objective of Higgins is to record a new voice on one of his machines. Mr Higgins hobby is also his life; his hobby is one of his main goals from day to day. Mrs Pearce tells Higgins that Eliza's accent is "something dreadful" this means the bet Higgins is about to accept will be even more challenging. The workings of Higgins machines are revealed when he is talking to Pickering. A man who looks at home in the drawing room of a fellow upper class man, this show class companionship. ...read more.

Mr Higgins seems unconcerned about Eliza, although she is adamant that she will not leave until she gets what she wants. Onlookers would be humoured at how Pickering is silenced from the shock of the way that the young lady speaks and laughter would almost certainly be heard as Eliza instructs Higgins on how to behave as a gentleman. Higgins once again shows his disrespect in calling Eliza baggage. Pickering shows he is not like Higgins when he speaks gently when asking her what she wants, once again guided by the stage directions. This is the first point at which the audience is made aware of Eliza's intentions. The crowd are now interested to learn if she will ever fulfil her ambition. Mrs Pearce steps in and asks Eliza how she could ever afford to pay Mr Higgins. "I know what lessons costs" is her reply. She clearly has no idea, much to the audience's amusement. Eliza feels that she is successful when Higgins questions her on the price she is willing to pay, as she believes he is being serious ...read more.