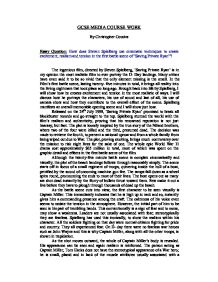 How does Steven Spielberg use cinematic techniques to create excitement, realism and tension in the first battle scene of &quot;Saving Private Ryan&quot;?

GCSE MEDIA COURSE WORK By Christopher Cousins Essay Question: How does Steven Spielberg use cinematic techniques to create excitement, realism and tension in the first battle scene of "Saving Private Ryan"? The ingenious film, directed by Steven Spielberg, `Saving Private Ryan' is in my opinion the most realistic film to ever portray the D- Day landings. Many critics have even said it to be so vivid that the only element missing is the smell. In the Film's first battle scene, lasting twenty- five minutes in total, it brings all reality into the living nightmare that took place so long ago. Brought back into life by Spielberg, I will show how he creates excitement and tension in the most realistic of ways. I will discuss how he portrays the characters, his use of sound and last of all, his use of camera shots and how they contribute to the overall effect of the scene. Spielberg manifests an overall memorable opening scene and I will show just how. Released on the 24^th July 1998, `Saving Private Ryan' promised to break all blockbuster records and go straight to the top. Spielberg stunned the world with the film's realism and authenticity, proving that his renowned reputation is not just hearsay, but fact. The plot is loosely inspired by the true story of the Niland brothers, where two of the four were killed and the third, presumed dead. ...read more.

Horvath continuously stays close to the Captain, waiting for his command and looking out for him. Spielberg uses him as the Captains right arm. Everything about Horvath, from his bear like face, down to his cumbersome build, shout; protector! In view of this, the audience take a liking to him and confide comfort in the fact that Horvath will protect and bring their `everyman' (the Captain) to safety. Spielberg uses the relationship between the two characters to excite the audience, as he shows that War is so out of the ordinary, that it brought together people in friendships who otherwise wouldn't have done so. Captain Miller and Sergeant Horvath have such a strong relationship during this scene that excitement arouses among the audience, as they know that together the two will survive. Private Jackson, the regiment's sniper is another character that has an essential role in the battle scene. His preliminary appearance is in the landing craft, immediately before the ramps descend. His face, being one of pure dread is an open book to the audience. He is so terrified that his expression and the first act that he commits, a kiss on a cross, show that he believes that there is no hope for survival left. It is as though he thinks that a kiss on the cross is the last action he is going to do and that if God is ever going to come to his aid, let it be now. ...read more.

Spielberg exploits the character's thoughts and feelings, making the audience connect with them, thus producing tension at the uncertainty of their survival. Through these points made by Spielberg, as a teenage male, I can appreciate the fact that these soldiers were not much older than I and that they weren't all war heroes, but young, petrified men. Sound is another resource greatly used by Spielberg. The ever-loud rapidity of war seems to up the pace of the scene constantly, heightening the adrenaline of the audience and bringing their physical emotional rate in parallel with the chaos on the screen. Spielberg produces immense excitement, as the audience cannot bear to look away. Every moment is unpredictable and so is the sound along with it and this is extremely exciting and tense for the spectator. The last and possibly the greatest used of all three techniques is that of camera work. Spielberg has used this element to create immense tension in the scene. He has done this most notably through a deception early on, by killing off characters that the audience have become attached to and so, simulating an emotion of loss. Through out the scene he has used a long lingering shots to contrast with the rapid staccato of battle, emphasising certain important pauses, thus also generating suspense. The shots of death throughout the scene are extremely moving and certainly cause every spectator to stop and think about the brave men who died on 6^th June 1944. ...read more.