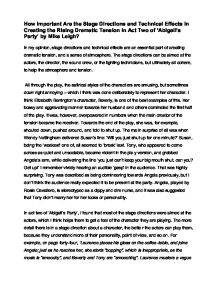 How Important Are the Stage Directions and Technical Effects in Creating the Rising Dramatic Tension in Act Two of 'Abigail's Party' by Mike Leigh?

How Important Are the Stage Directions and Technical Effects in Creating the Rising Dramatic Tension in Act Two of 'Abigail's Party' by Mike Leigh? In my opinion, stage directions and technical effects are an essential part of creating dramatic tension, and a sense of atmosphere. The stage directions can be aimed at the actors, the director, the sound crew, or the lighting technicians, but ultimately all cohere, to help the atmosphere and tension. All through the play, the satirical styles of the characters are amusing, but sometimes down right annoying - which I think was done deliberately to represent her character. I think Elizabeth Berrington's character, Beverly, is one of the best examples of this. Her bossy and aggravating manner towards her husband and others dominated the first half of the play. It was, however, overpowered in numbers when the main creator of the tension became the receiver. Towards the end of the play, she was, for example, shouted down, pushed around, and told to shut up. The main surprise of all was when Wendy Nottingham delivered Susan's line: 'Will you just shut up for one minute?' Susan, being the 'weakest' one of, all seemed to 'break' last. Tony, who appeared to come across as quiet and unsociable, became violent in the play version, and grabbed Angela's arm, while delivering the line 'you just can't keep your big mouth shut, can you? Get up!' ...read more.

All the way through the play, I feel that the relationships between the married characters deteriorate. For example, from the time Laurence arrived home from work, Beverly and he were already getting on each others nerves, and throughout the play, they are the cause of multiple points of dramatic tension. An example of this would be when Laurence arrives back from checking Abigail's party, and asks Sue if she wants a sandwich, Beverly and he have a sort of 'battle' to see who is right. The tension peaks when Laurence runs up to Beverly with a knife, and this shock is represented by a complete freeze on stage. The silence lurks until Beverly, in a 'kind' voice says 'Laurence, will you please go back into the kitchen and finish making your little sandwich, all right?' I feel very annoyed at Beverly for this line, because I thought she was the cause of it, and the way she very quickly added on the 'all right' is very symbolic of her complete disregard of the intensity and seriousness of the situation. Another example of the dramatic tension between Beverly and Laurence is when Beverly puts on the Elvis Presley record loud, and Laurence tries to turn it down so that he can hold a conversation. Then, when Beverly rushes to the record to turn it up, Laurence grabs her arm. The stage direction is important here. 'Beverly turns the volume up. Laurence turns it off. Beverly goes to turn it on; Laurence grabs her arm. Pause. ...read more.

I feel that if Berrington simply poked him, and said 'but you're soaking wet,' I don't feel this would have been effective enough in getting across the relationship. As a result of doing it the way she did. Berrington was able to keep Beverly's mild erotically slutty nature alive. I think this play was also a representation of life in the late 1970s. Women's Liberation was a big thing in the 70s. I think Beverly is a prime example of how women were becoming more in control of themselves and others. Her strong character and her sense of independence, can back up Greer's thoughts. The Australian lecturer at Warwick University in England claimed that the book (The Female Eunuch) was designed to be an inspiration to women. 'If women were to realise their true potential as independent people, the world would be a better place.' She also claimed that 'marriage was a legalised form of slavery for women.' I also think that this play is an illustration of how, although high inflation, bad industrial relations, and unemployment reaching record levels under Callaghan's Labour government, people still seemed to have their sense of occasion. This is evident in the celebration of Queen Elizabeth II's Silver Jubilee throughout Britain and the Commonwealth - including street parties and a rather expansive Royal tour of the Commonwealth. This display of national pride and patriotism can be related to Beverly and Laurence because even though their marriage was hitting rock bottom, they still made their best efforts to entertain guests. 2 ...read more.