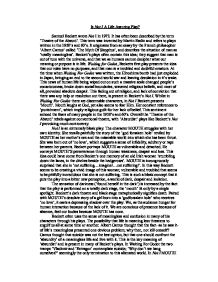 Is Not I A Life Assuring Play? Samuel Beckett wrote Not I in 1972. It has often been described by the term 'Theatre of the Absurd'

Is Not I A Life Assuring Play? Samuel Beckett wrote Not I in 1972. It has often been described by the term 'Theatre of the Absurd'. This term was invented by Martin Esslin and refers to plays written in the 1950's and 60's. It originates from an essay by the French philosopher 'Albert Camus' called 'The Myth Of Sisyphus', and describes the situation of man as 'totally meaningless'. Beckett's plays often contain this idea; they suggest that man is out of tune with the universe, and that we as humans cannot decipher what our meaning or purpose is in life. Waiting for Godot, Becketts first play presents the idea that our roles have no purposes, and that man is a troubled and doubtful creature. At the time when Waiting For Godot was written, the Hiroshima b**b had just exploded in Japan, bringing an end to the second world war and leaving desolation in it's wake. This news of human life being wiped out on such a massive scale changed people's consciousness, broke down social boundaries, wavered religious beliefs, and most of all, provoked absolute despair. ...read more.

Paired with MOUTH's desolate story of a girl born into a 'godforsaken hole' who receives 'no love', it casts a depressing shadow over the play. We, as the audience hunger for human interaction because of the lack of it. We are conscious of presence because of absence, feel our bodies because MOUTH has none. Beckett often uses the sense of meaningless and confusion in many of his characters through his plays. The possibility that life is meaning less threatens to engulf us all at some time or another. Albert Camus thought that the fact- as he saw it- of life's meaningless presented one obvious problem; why then, not kill oneself? Camus thought that suicide was not the best option, but that one should confront the 'absurdity' of a meaningless life and live with it. This is the key meaning of 'absurdist' and is present in many of Becket's plays. In Waiting For Godot the two tramps 'Vladimir and 'Estragon' contemplate suicide; 'Why don't we hang ourselves?' seemingly the only termination to this alienated world. In Not I MOUTH struggles with meaninglessness. ...read more.

Through the play it gives a sense that MOUTH is talking to a psychoanalyst or Shrink, as she seems to be answering questions; 'what?...the buzzing?...yes', though she is talking to no-one. This gives a slightly positive outlook to the play, that she is being helped and not bottling up her emotions. Ironically, the story of MOUTH's dark, despair and isolation contrasts greatly with Beckett's character in real life. He was said to be a kind, generous character who had a mostly uneventful life, though naturally with a rich imagination. Overall Not I is primarily a bleak play. The miserable story of a girl born into 'no love' and the dark stage casts a depressing shadow over it. Beckett's writing is not elegant or decorative, neither are his props or stage directions. He liked everything to have a purposes. He presented the harsh truth of human existence, and put into words the confusion and disillusionment of man. He famously said; 'we are all born mad. Only some remain so'. Though you could say that Not I is a life assuring play only by the fact that MOUTH survives at the end when the curtain closes. Unlike in Shakespeare's tragedies where the characters are obliged to die at the end, MOUTH does not. ...read more.