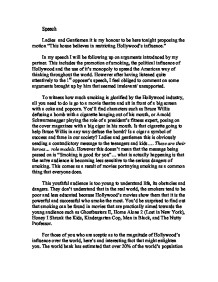 Speech Ladies and Gentlemen it is my honour to be here tonight proposing the motion "This house believes in restricting Hollywood's influence." In my speech I will be following up on arguments introduced by my partner. This includes the promotion of smoking, the political influence of Hollywood and the use of it's monopoly to spread the American way of thinking throughout the world. However after having listened quite attentively to the 1st opposer's speech, I feel obliged to comment on some arguments brought up by him that seemed irrelevant/ unsupported. To witness how much smoking is glorified by the Hollywood industry, all you need to do is go to a movie theatre and sit in front of a big screen with a coke and popcorn. You'll find characters such as Bruce Willis defusing a b**b with a cigarette hanging out of his mouth, or Arnold Schwarzenegger playing the role of a president's fitness expert, posing on the cover magazines with a big cigar in his mouth. ...read more.

You'd be surprised to find out that smoking can be found in movies that are practically aimed towards the young audience such as Ghostbusters II, Home Alone 2 (Lost in New York), Honey I Shrunk the Kids, Kindergarten Cop, Men in Black, and The Nutty Professor. For those of you who are sceptic as to the magnitude of Hollywood's influence over the world, here's and interesting fact that might enlighten you. The world bank has estimated that over 20% of the world's population owns a television set which means that the potential audience having access to Hollywood's influence can be as high as 80% Ladies and Gentlemen, with such a large and diversified audience there is a very serious threat as to it's cultural and political influence. Hollywood usually tends to promote a "good vs. ...read more.

However there are 17 times more R rated films being produced. If the producers are so interested in money then why don't they focus on the larger audience? Ladies and gentlemen. Movies are powerful opinion makers that exert great cultural, moral and political influences. This strong influential power is being used to promote an American view of the world and encourages prejudice on ethnic minorities on a national and international basis. Hollywood uses actors to promote smoking, John Travolta makes it look cool, Sharon Stone gives it a sexy image and Leonardo DiCaprio just has to light up to make it look appealing. The evil ideas are always more dangerous than inanimate objects because they are required in order to give birth to action. If we must restrict either, we should restrict the one which is more dangerous, and in the case of this debate I am referring to Hollywood's influence. ...read more.