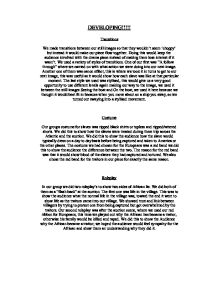 Our groups costume for slaves was ripped black shirts or topless and ripped/tattered shorts. We did this to show how the slaves were treated during there trip across the Atlantic and the auction

DEVELOPING!!!!! Transitions We made transitions between our still images so that they wouldn't seem 'choppy' but instead it would make our piece flow together. Doing this would keep the audience involved with the drama piece instead of making them lose interest if it wasn't. We used a variety of styles of transitions. One of our first was "A follow through" where we carried on with what action we were doing into our next image. Another one of them was canon effect, this is where we took it in turns to get to our next image, this was useful as it would show how each slave was like at that particular moment. The last style we used was stylised, this would give us a very good opportunity to use different levels again making our way to the image, we used it between the still images Seeing the boat and On ...read more.

We also chose the red band for the traitors in our piece for exactly the same reason. Roleplay In our group we did two roleplay's to show two sides of African lie. We did both of them as a "flash back" at the auction. The first one was life in the village. This was to show the audience what the normal life in the village was, toward the end it went to show life as the traitors came into our village. We showed trust and link between villagers by trying to protect one from being captured but got overwhelmed by the traitors. Our second roleplay was after the auction scene, where we used our red ribbon for Europeans, this time we played out why the African has became a traitor, otherwise his family would be killed and raped. ...read more.

State 4 was very dim, we used this to focus on our roleplay, so we can put the audiences mind to focus on the two who told the story Music In our piece of drama we used different pieces of music to enhance it and turn our montage into total theatre. There were three types of music we only decided to use one because we decided the others didn't fit in with our performance. We decide to use Track two, this involved a mellow warm sound which represented a community so we used it in our first still image, it should that at this time the Africans did have a voice of there own, before it was "taken away" from them by the Europeans. We wanted the audience to know and hear that it was a community by adding music, we thought we could achieve them thinking that and showing how life was before the traitors and Europeans came and destroyed or took away their life in Africa ...read more.