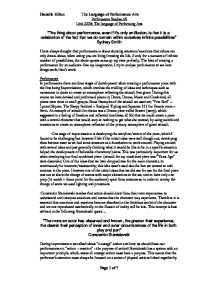 Performance Studies AS Unit 2556: The language of Performing Arts "The thing about performance, even if it's only an illusion, is that it is a celebration of the fact that we do contain within ourselves infinite possibilities" Sydney Smith I have always thought that performance is about showing situation/emotions that others can only dream about, when acting you are living/creating the life, if only for a moment of infinite number of possibilities, the above quotes sums up my view perfectly. The Idea of creating a performance for an audience fires my imagination. I try to analyse performance to see how things work/don't work. Performance In performance there are three stages of development when creating a performance piece with the first being Improvisation, which involves the trialling of ideas and techniques such as movement in dance to create an atmosphere reflecting the stimuli first given. During this course we have devised and performed pieces in; Dance, Drama, Music and Combined, all pieces were done in small groups. Some Examples of the stimuli we used are; "Free Bird" - Lynard Skyner, The Sleepy Sentinel - Rudyard Tipling and Squenza 111 for Female voice - Berio. An example of stimuli for drama was a Drama piece called Brazen (weep), which suggested to a feeling of freedom and reflected loneliness, all felt that we could create a piece with a central character that would stop at nothing to get what she wanted, by using motifs and transitions to create an atmosphere reflective of the primary atmosphere of given stimuli. One stage of improvisation is developing the storyline/action of the piece, which I found to be challenging but however I felt if the initial ideas were well though out, developing them became easer as we had some structure as a foundation to work around. Playing around with several ideas and just generally thinking what it would be like to be in a specific situation helped the development of believable characters/pieces. ...read more.

Fosse was known for his thoroughly modern style, a signature one could never mistake for anyone else's. Snapping fingers are omnipresent, swivelling hips and strutting predominate, as do white-gloved, single-handed gestures. Fosse himself often called the amalgamation of these moves the "amoeba", and that word as much as any describes his particular style, one at once fluid and angular. By studying Fosse and Bruce and experimenting with different styles of music and movement we transformed the piece into a lively intriguing piece that can be enjoyed at many different levels of understanding. Our dance piece was very much based on the Bob Fosse style ie; swivelled hips and fluid movement All art forms perform a different function for the audience in turn; Dance is an "artistic representation through choreographed movement" and exhibits emotion for the audience where as drama coveys often-definite emotion such as death. The Dancer believes that his art has something to say which cannot be expressed in words or in any other way than by dancing... there are the times when the simple dignity of movement can fulfil the function of a volume of words. There are movements, which impinge upon the nerves with a strength that is incomparable, for movement has power to stir the senses and emotions, unique in itself. This is the dancer's justification for being, and his reason for searching further for deeper aspects of his art." Doris Humphrey Music on the other hand is different, it can make the audience both see and hear emotions as it can generate distinctive and emotive sounds. When used alone any of the three art forms are capable in creating total focus in it such as becoming immersed in a music piece or drama but when used in unison ive discovered heightens the experience tenfold! With everything we do in performing arts we have got to consider how the audience will perceive the meaning of each performance we do. ...read more.

By exposing ourselves to criticism we give ourselves the opportunity to improve in unexpected ways. Through out the combined final piece, I've found that when used in conjunction the three art forms releases there full the potential and can affect the performance and perception of any piece. I enjoyed the final combined piece as it had the most vibrancy out of the four pieces. I feel is for two reasons, to start with we were feeding of the electricity and excitement that an live audience gives and also simply that the merging of the three art forms created a different style of piece that appealed to everyone, each art form had qualities that capture the minds of the audiences and in our piece were combined in an effort of larger art - The Art of Performance! (Language is a fluid, ever changing) Combing all three means enhanced influence and connected with a larger majority of the audience I feel that during my study of "The language of Performing Arts". I have come away this section of the syllabus with a sense of enjoyment and feel I have learnt lots; I have been able to look deeper into my understanding of its meaning and I have discovered that there are so many different elements to it. When used on their own each element makes a small difference but when combined make a huge difference and impacts on the understanding of performance for both actor and audience. I agree with Stanislavski principals of performance and found his methods to be of the most use in discovering the true language of performance arts. To me performance is about both audience and actor, as without an audience you don't have a true performance but however performance is about expression and creative feeling! ?? ?? ?? ?? Danielle Hilton The Language of Performance Arts Page 1 of 7 ...read more.