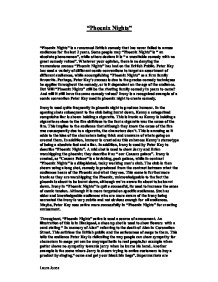 "Phoenix Nights" "Phoenix Nights" is a renowned British comedy that has never failed to amuse audiences for the last 2 years. Some people may "Phoenix Nights" is " an absolute phenomenon", while others declare it is " a unsuitable comedy with no great comedy values". Whatever your opinion, there is no denying the tremendous success "Phoenix Nights" has had on the British Public. Peter Kay has used a variety of different comic conventions to target an assortment of different audiences, while accomplishing "Phoenix Nights" as a firm family favourite. Perhaps, Peter Kay's success is due to the precise comedy techniques he applies throughout the comedy, or is it dependent on the age of the audience. But Will "Phoenix Nights" still be the riveting family comedy in years to come? And will it still have the same comedy values? Irony is a recognized example of a comic convention Peter Kay used in phoenix night to create comedy. Irony is used quite frequently in phoenix night to produce humour. In the opening shots subsequent to the club being burnt down, Kenny a categorized compulsive liar is shown holding a cigarette. This is ironic as Kenny is holding a cigarette so close to the fire oblivious to the fact a cigarette was the cause of the fire. This implies to the audience that although they know the cause of the fire was consequently due to a cigarette, the characters don't. ...read more.

Although, in a few years perhaps the humour will have been exhausted from trademarks and in jokes in "Phoenix Nights". Maybe stereotypes and exaggeration are more effective in "Phoenix Nights". During "Phoenix Nights", Peter Kay uses stereotypes to amuse and relate to the audience by mimicking everyday people and situations. At the beginning, a close up is used to show Den Perry - Brian Potter's largest rival. The close up proves to the audience that Den Perry is a wanabee small town gangster, as he is presented as being gruff, with a cigar. The humour is created through the audiences' knowledge that really he's not tough or a gangster, although he believes he is. This reinforces the idea that many of the characters think they're higher up in society than they actually are. Another example is Ray Von, his name "Ray Von" is a pun and homonym related to an eighties phrase. Ray Von is presented as a DJ who's stuck in the 80s; this is created by his cheesy sayings. Additionally his clothing is very 80s style although its exaggerated, Comedy is created as older audiences can relate to him through their childhood. Finally, Peter Kay exaggerates the idea Kenny being a compulsive liar to create humour. An example of this is in the courtroom scene where Kenny is shown wearing medals on his jumper. This has the reverse effect on the audience and enhances Kennys stereotype as being a liar, although he thinks it makes him look more believable. ...read more.

A midshot is used so that the audience can focus on what the characters are saying and not the surroundings. Brian misses the innuendo there could be two possible explanations for this either Brians silly and didn't get the innuendo, or he is so used to this kind of conversation. Cohesion is also used as Brian mocks homosexuals right through but there he is talking in a h********l manner. In general, Peter Kay uses puns and innuendos to successfully create humour, although sometimes they're politically incorrect this is the reason why innuendos are funny as it's the only time many British people can laugh and talk about subjects they wouldn't normally discuss. All of the comic conventions in "Phoenix Nights" are successful in their own ways. Overall, "Phoenix Nights" is a humorous, comical comedy with great comic techniques that amuses many different audiences. Since "Phoenix Nights" more comedies have started as a result of it e.g. "Max and Paddy". Maybe this is due to the popularity of some characters or the reason that all the other characters had been stretched to the maximum. In my view peter Kay has used some techniques in a more clever subtle way to make it amusing, whereas some techniques are used in a more obvious to make it hilarious. Consequently, I think maybe some of Peter Kays humour could be exhausted in years to come, in addition some of his comedy may perhaps insult people the further Peter Kay makes his comedy politically incorrect or perhps, as a society, we are becoming boredof this kind of "correctness". ?? ?? ?? ?? Laura Jones ...read more.