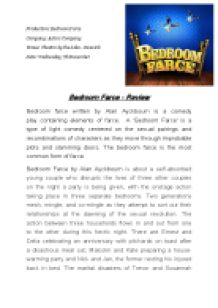 ﻿Production: Bedroom Farce Company: Actors Company Venue: Theatre by the Lake - Keswick Date: Wednesday 7th November Bedroom Farce - Review Bedroom farce written by Alan Ayckbourn is a comedy play containing elements of farce. A ?Bedroom Farce? is a type of light comedy centered on the s****l pairings and recombinations of characters as they move through improbable plots and slamming doors. The bedroom farce is the most common form of farce. Bedroom Farce by Alan Ayckbourn is about a self-absorbed young couple who disrupts the lives of three other couples on the night a party is being given, with the onstage action taking place in three separate bedrooms. Two generations mesh, mingle, and co-mingle as they attempt to sort out their relationships at the dawning of the s****l revolution. The action between three households flows in and out from one to the other during this hectic night. There are Ernest and Delia celebrating an anniversary with pilchards on toast after a disastrous meal out; Malcolm and Kate preparing a house-warming party and Nick and Jan, the former resting his injured back in bed. ...read more.

The furniture consists of a double bed, bedside tables and a dressing-table and a phone by the bed. A door leads to the landing and the rest of the house, another to a bathroom. Props such as Delia?s make up and the cups Ernest used also contributed to the scene being more realistic. The second bedroom was Malcolm and Kate's. This is a smaller room; which suggests it could be a front bedroom in a terrace house which they are in the process of converting. It is sparsely furnished, their double bed being the centrepiece. One of the walls has been re-papered, the rest are stripped as they are in the process of decorating. In one corner is a cardboard package, unopened, which happens to be Kate?s surprise that we later find out to be a set of drawers. And a box of bits and bobs (including a lamp that Susannah uses as a weapon against Trevor) There is also a tool box and various items of clothing in and around the bed. There is also a phone by the bedside. ...read more.

They had 74 sound cues and 80 lighting cues. These were naturalistic. The lighting was used to help the audience know which room the action was taking place in. The sound was mainly party atmosphere, outside atmosphere, telephones and Doorbells. The play was set in the mid 1970?s therefore the actors were dressed appropriately. Malcolm in drainpipe jeans then changed into cords and a 1970?s shirt Kate wore a floaty maxi dress, Susannah was in a hippy type of shirt and denim skirt, Jan in a nice dress. Delia wore a more dated dress which matched well with Earnest?s Dinner suit. Trevor was wearing flared jeans, Nick in blue pyjamas. Susannah, Delia, Earnest and Jan all changed into nightwear during the performance, this did not affect the scenes as they still flowed fluently. Trevor also appeared in very fetching matching vest and y-fronts in the scene at Nick and Jan?s. As I had anticipated from its name this play was very amusing. Personally I think that Bedroom Farce was one of the best productions I have seen. I think the cast at the Theatre By the Lake delivered a very good interpretation of Ayckbourn?s play and a very witty, entertaining production. ...read more.