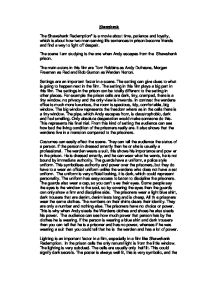 Shawshank The Shawshank Redemption" is a movie about time, patience and loyalty, which is about how two men serving life sentences in prison become friends and find a way to fight off despair. The scene I am studying is the one when Andy escapes from the Shawshank prison. The main actors in this film are Tom Robbins as Andy Dufresne, Morgan Freeman as Red and Bob Gunton as Warden Norton. Settings are an important factor in a scene. The setting can give clues to what is going to happen next in the film. The setting in this film plays a big part in this film. The settings in the prison can be totally different to the setting in other places. For example the prison cells are dark, tiny, cramped, there is a tiny window, no privacy and the only view is inwards. In contrast the wardens office is much more luxurious, the room is spacious, tidy, comfortable, big window. The big window represents the freedom where as in the cells there is a tiny window. The pipe, which Andy escapes from, is claustrophobic, dark and foul smelling. Only absolute desperation would make someone do this. ...read more.

Lighting is an important factor in a film, especially in a film like Shawshank Redemption. In the prison cells the only natural light is from the little window. The lighting is very subdued. The cells are usually only half lit. This could signify dark secrets. The poster is always well lit, this is very symbolic, and the poster is the way to freedom. The poster is "the light". When Andy escapes the lightening is helping him, nature is lighting his way out. The audience can see that in this film light symbolises freedom and hope. Sound affects and music are crucial in a film they set the tone for the scene. The gates screeching and the role call reminds you of prison life. When the siren goes off because of Andy's escape, this symbolises sirens going of in the warden's head saying that things are going to change in the prison for the worse. The jingling of the keys also reminds of you imprisonment. The background music, which is played while the search for Andy is on, is fast paced, this signifies that the wardens and guards are panicking. The sound of the warden's shoes gives us a clue of what could happen next. ...read more.

Camera angles can tell the audience lots of information and even gives the audience clues to what has happened. Special effects adds to the scene. It makes the scene sound and look much better to the audience. In this scene there is not a lot of special effects. The only special effects are the thunder lightning. The lightning helped Andy escape. This shows the audience that nature helped Andy escape. The poster is very vital, it hides Andy's escape routes, and without this there would not be an escape. The bible is also very helpful, this hides the rock hammer. These two items are very important in the film. I think this scene is effective, it shows suspense, anger and power being lost. At the end of scene they narrate the story very well, this fills all the gaps in the audiences mind. I did not like the film as a whole, some scenes where excellent but I thought the film just dragged on, just get to the point. I also thought it was predictable, I think you predict that Andy was going to escape. These are the reason why I did not like the film. ...read more.