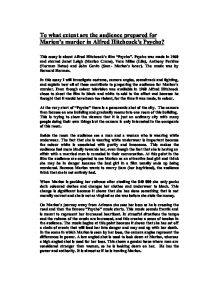 To what extent are the audience prepared for Marion&amp;#146;s murder in Alfred Hitchcock&amp;#146;s Psycho?

To what extent are the audience prepared for Marion's murder in Alfred Hitchcock's Psycho? This essay is about Alfred Hitchcock's film "Psycho". Psycho was made in 1960 and starred Janet Leigh (Marion Crane), Vera Miles (Lila), Anthony Perkins (Norman Bates) and John Gavin (Sam- Marion's lover). The music was by Bernard Herman. In this essay I will investigate costume, camera angles, soundtrack and lighting, and explain how all of these contribute to preparing the audience for Marion's murder. Even though colour television was available in 1960 Alfred Hitchcock chose to shoot the film in black and white to add to the effect and because he thought that it would have been too violent, for the time it was made, in colour. At the very start of "Psycho" there is a panoramic shot of the city. The camera then focuses on one building and gradually zooms into one room of this building. This is trying to show the viewers that it is just an ordinary city with many people doing their own things but the camera is only interested in the occupants of this room. Inside the room the audience see a man and a woman who is wearing white underwear. The fact that she is wearing white underwear is important because the colour white is associated with purity and innocence. ...read more.

In this scene the director has also used Pathetic Fallacy to show Marion's feelings, her feelings are quite stormy and so is the weather. The audience will probably have some idea that this may be Marion's final journey and that she is driving through the rain and may never see light again. The Bates motel fits the traditional description of main setting of a horror film; it is a deserted motel, which is shadowed by an old house that is higher up than the motel itself. The weather and lighting effects fit into the horror genre and they form a picture in the audience's minds. Norman does not seem a threat to Marion, he is dressed plainly and appears normal. He appears to be boyish and gentle, and incapable of murder, although it is obvious that he is under the influence of his mother because he frequently talks about his mother. The camera zooms into his face making the audience question whether Norman is all that he seems. This close up invites the audience take a closer look at him. Norman hesitates when choosing which cabin to put Marion in. He puts his hand by the key to cabin one, he stops and gives Marion a sneaky look out of the corner of his eye. ...read more.

There is no music in the scene and the audience are waiting for something bad to happen. The music starts all of a sudden when "mother" pulls back the shower curtain and points the knife at Marion. The camera does not actually show the knife touch Marion. One reason for this is that the censorship laws in the 1960s would not have allowed it to be shown. Instead it cuts from "mother's" face to "Marion's" face quickly. This creates the illusion that Marion is being stabbed even though the audience do not actually see it. The music fits in with the camera shots and helps to create the illusion in our minds. The music is made to sound like screams and tears. The scene is edited so that the attack seems more frenzied and dangerous because of the quick cuts from one person's face to another, and from the hand to the knife. It is not obvious to the audience that Norman's mother is dead because in the attack the camera does not show "mother's" face because it is in darkness. In conclusion, the audience are prepared for Marion's death in "Psycho" by factors such as camera angles showing her to be less powerful than men and the increasing tension added by the music and particular shots. ...read more.