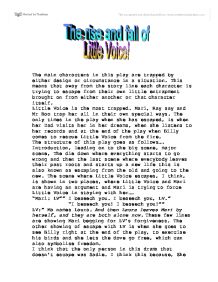 The main characters in this play are trapped by either design or circumstance in a situation. This means that away from the story line each character is trying to escape from their own little entrapment brought on from either another or that character itself. Little Voice is the most trapped. Mari, Ray say and Mr Boo trap her all in their own special ways. The only times in the play when she has escaped, is when her Dad visits her in her dreams, when she listens to her records and at the end of the play when Billy comes to rescue Little Voice from the fire. The structure of this play goes as follows.... Introduction, leading on to the big scene, major scene, The die down where everything starts to go wrong and then the last scene where everybody leaves their past roots and starts up a new life this is also known as escaping from the old and going to the new. The scene where Little Voice escapes, I think, is shown in two places, where Little Voice and Mari are having an argument and Mari is trying to force Little Voice in staying with her.... "Mari: LV"" I beseech you. ...read more.

I found that each character had another character that was similar to the other in some way, Mari and Ray Say, they were both loud, argumentative, they both only loved Little Voice for her money, and they both had a poor ending when LV said that she didn't want to do another show because neither of them never listened to what she had to say, so by the end of the film there was nowhere for them to go so they would have to start a new life with nothing. The next two characters that resembled one another in some way were Sadie and George. Most people see these two as background characters as they hardly ever speak and they are only in that scene so that another one of the characters can speak. I feel that these two people get pushed out of the play a lot. Billy pushes out George and Mari and Ray Say elbow Sadie out. Finally you can guess who is coming next, yes, Little Voice and Billy, They both start off as somewhat quiet characters as when they first meet it seems like neither of them have a tongue, But by the end of the play they have gradually worked themselves up to be the bravest and the most powerful characters as they both have each other and they haven't lost anything (that they wanted!) ...read more.

as the day before he said to Mr Boo that she's the one, and Mari thought that he was talking about herself. I fell that this play was set in the end of the 1990's by reason of that mobile phones were not invented, The BT van was quite modern and that the costume and staging was of modern times. The language too was very modern and simple; you could tell that the characters were of a lower class just by looking at the scenery, housing and language used, for example there is a lot of slang going on especially between Mari and Ray when they are mucking around, i.e. Mari: See 'em all standin' up then? In some cases this could show that they are both quite common, which could prove my point of them being lower class and quite poor. My favourite part in this play is at the end where Ray thinks that LV has gone mad on him because she starts acting like here heroes, (Judy Garland, Marilyn Monroe and Shirley Bassey), to try and scare him away to get him to leave her alone, besides that it is quite a shock as you are not expecting her to act like this which is good because it shows that Herman (director) has done this purposely to fool the audience. ...read more.