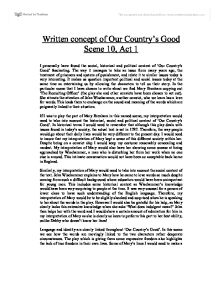 Written concept of Our Country's Good Scene 10, Act 1 I personally have found the social, historical and political context of 'Our Country's Good' fascinating. The way it manages to take an issue from many years ago, the treatment of prisoners and system of punishment, and relate it to similar issues today is very interesting. It makes us question important political and social issues today at the same time as entertaining us by allowing the characters to tell us their story. In the particular scene that I have chosen to write about we find Mary Brenham copying out 'The Recruiting Officer' (the play she and other convicts have been chosen to act out). She attracts the attention of John Wisehammer, another convict, who we learn has a love for words. ...read more.

This intimate conversation would not have been so acceptable back home in England. Similarly, my interpretation of Mary would need to take into account the social context of the text. John Wisehammer explains to Mary how he came to love words so much despite coming from such a difficult background where education would have been unimportant for young men. This includes some historical context as Wisehammer's knowledge would have been very surprising to people at the time. It was very unusual for a person of lower class to have such understanding of the English language. Therefore, my interpretation of Mary would be to be slightly shocked and surprised when he is speaking to her about the words in the play. However I would also be grateful for his help, as Mary clearly lacks this extensive knowledge when she asks 'What does indulgent mean?' ...read more.

Love, I suppose' In a rather Brechtian style I would look at the audience here, directing my line at them, challenging them directly and the breaking the symmetry of the two characters' discussion. The whole beauty of this scene is that it makes a strong political comment as it challenges Governer Phillip's comment from earlier in the play: that by speaking Farquhar's language 'the convicts will be speaking in a refined, literate language and expressing sentiments of a delicacy they are not used to'. Of course, scene 10 contradicts this statement entirely, and by interpreting the character of Mary in a way that shows how much these lines and words relate to her and her past, the political comment that criminals are humans too and perfectly capable of expressing sentiments no matter how refined their language will be clearly made. ...read more.