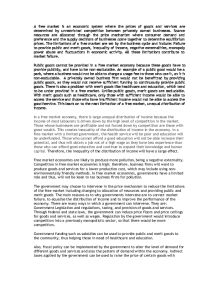 A free market is an economic system where the prices of goods and services are determined by unrestricted competition between privately owned businesses.

A free market is an economic system where the prices of goods and services are determined by unrestricted competition between privately owned businesses. Scarce resources are allocated through the price mechanism where consumer demand and preference and the supply decisions of businesses come together to determine equilibrium prices. The limitations of a free market are set by the business cycle and include: Failure to provide public and merit goods, inequality of income, negative externalities, monopoly power abuse and fluctuations in economic activity. All these limitations contribute to market failure. Public goods cannot be provided in a free market economy because these goods have to provide publicly, and have to be non-excludable. An example of a public good would be a park, where a business would not be able to charge a usage fee to those who use it, as it is non-excludable. A privately owned business firm would not be benefitted by providing public goods, as they would not receive sufficient funding to continuously provide public goods. There is also a problem with merit goods like healthcare and education, which tend to be under provided in a free market. ...read more.

Free market economies are likely to produce more pollution, being a negative externality. Competition in free market economies is high; therefore, business firms will want to produce goods and services for a lower production cost, which may include using non-environmentally friendly methods. In free market economies, governments have a limited role and thus, will not be keen to tax business firms for pollution. The government may choose to intervene in the price mechanism to reduce the limitations of the free market including changing to allocation of resources and providing public and merit goods. The main reasons as to why governments intervene are to correct market failure, to equalise the distribution of income and to improve the performance of the economy. There are many ways in which a government can intervene. They are: Government Legislation and regulations, taxing, and provision of goods and services. Through federal and state laws, the government can induce price floors and price ceilings for goods and services, as well as wages. Regulation by the government would introduce competition into a previously monopolistic sector, so that there would be more competition. ...read more.

of these three things: * Stabilisation * Allocation * Distribution Like all market economies, the Australian economy goes through the fluctuations associated with the business cycle. Stabilisation refers to the desire of the Australian government to minimize the size of these fluctuations. When a trough gets too low, it becomes a recession, and that will lead to excessive unemployment. When a peak gets too high it becomes a boom, and that will lead to inflation. Through the process of stabilisation the Australian government hopes to minimize these negative side effects. We already know that when left unchecked, certain resources will be allocated inefficiently. Market failure implies that externalities will result, and some public goods and services (such as roads, street lights and public parks) may not be produced at all. As such, the Australian government will intervene to ensure that the allocation of resources is more efficient than it would otherwise have been. Finally, it is apparent that a freely operating market economy will also lead to an inequitable distribution of income. Through budgetary policy, the Australian government will seek to tax high income earners so that they can pay transfer payments to those in need - they will redistribute the income so that it is more equitable than it would otherwise have been. ...read more.

****
This essay is strong on market failure but not so strong at describing how the market actually works. I would like to have seen more on this at the start.