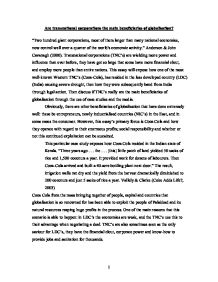 Are transnational corporations the main beneficiaries of globalisation?

Are transnational corporations the main beneficiaries of globalisation? "Two hundred giant corporations, most of them larger than many national economies, now control well over a quarter of the world's economic activity." Anderson & John Cavanagh (2000). Transnational corporations (TNC's) are wielding more power and influence than ever before, they have got so large that some have more financial clout, and employ more people than entire nations. This essay will expose how one of the most well-known Western TNC's (Coca-Cola), has resided in the less developed country (LDC) (India) causing severe drought, then how they were subsequently band from India through legal action. Then discuss if TNC's really are the main beneficiaries of globalisation through the use of case studies and the media. Obviously, there are other beneficiaries of globalisation that have done extremely well: these be entrepreneurs, newly industrialised countries (NIC's) in the East, and in some cases the consumer. However, this essay's primary focus is Coca Cola and how they operate with regard to their enormous profits; social responsibility and whether or not this continued exploitation can be sustained. ...read more.

the factory's . . . [Coca Cola's] licence to operate. It did so despite losing almost half of its annual income - some 700,000 rupees (about �9,000) - from the decision. Coca-Cola's lawyers appealed to the next level of government, which suspended the revocation and allowed the factory to continue operating [temporally]. Vallely & Clarke (Coke Adds Life?, 2003) Coca Cola of course denied all these allegations and said that the water shortage was due to a decline in rain fall. However, a meteorologist suggested that the amount of rain had actually increased. Whichever angle you look at this, Coca Cola has acted immorally: if they 'believed' that the amount of rain fallen had dropped, why did they take it all for themselves? Moreover, if the meteorologists report was correct then Coca Cola must have taken a substantial amount of water from the site. Touching on the social aspect of this, the water supply was depleted until the water that was left contained such a high degree of salt; it was almost unfit for human sanitation and consumption, let alone irrigation. ...read more.

to account. Also, the drafting of international legislation to prevent TNC's relocating so easily leaving hundreds without work. With these improvements in place the case may be that globalisation will still be making winners and losers. The case may also be that TNC's will still be the main beneficiaries of globalisation, but we may be able make the worlds largest firms and the consumer more ethical and moral. Raising awareness amongst consumers about the social issues and exploitation that is going on in LDC's in the East, and to raise the issues of previous third-world exploitation to TNC's looking to locate in weaker societies. All these aspects need to be addressed to the consumer, TNC's and the governments of the countries that are being exploited. Furthermore, the decisions that are binding on the local communities in LDC's must also be coming not just from the TNC's, but from the government and the local people themselves. Once these issues have been addressed and are being implemented on a world-basis the current exploitation may at last come to and end. Thus, ultimately closing the gap between who is and who are not benefiting from globalisation in today's capitalist free market society. ...read more.