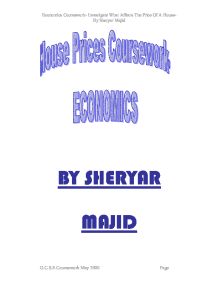 All the data is from the year 1998. From these statistics one can prove that unemployment is a major factor affecting house prices. Using these graphs we can see how across the country the unemployment affects house prices. The graphs show us that no matter what area you live in your house prices are still affected by the rate of unemployment, which shows how major unemployment is a factor in determining the price of a house. Now that I have compared across the country , I am now going to compare two identical houses in terms of size of the house and garden etc. but the two houses will be in two different areas in Lodon. I will look at and explore all the things about these houses and especially I will talk about all the things which I said affect house prices including unemployment and then try to explain why I think that the price of the two houses, even though they will are identical in the size, will be very different. This prove my statistics as well as show how two identical houses get affected in terms of price and then put that back to the big scale and see that each and every house in the United Kingdom is affected by house prices. First I will describe the two houses I have chosen and tell you about the amenities and services they have and other good things about them, then after I have described both houses I will explain why there is a difference in price. ...read more.

The overall outcome of my whole investigation proves from my research and my statistics which I have stated in my graphs it shows that many things such as crime rate, interest rate and unemployment affect house prices, but as I said at the beginning and after this investigation I am more sure of it now, I think that unemployment is still a major factor affecting house prices. I have come to this conclusion, because of the amount of houses unemployment affects. OK that interest rates, location of house are major factors too but they don't affect every house in the country in the same way that unemployment does, unemployment affects each and every house in the United Kingdom, and not only that, but it can affect houses two or three different ways. The other factors don't affect other types of housing e.g. flats or rented property, but unemployment still does because the same rules apply for these properties as they do for houses when they are affected by unemployment i.e. people want to move to an area with low unemployment either to a flat or a house, either rented or to buy, but demand for both these things go up and consequently the price. But for things like interest rates, only the houses and flats on sale are affected as houses and flats on rent don't have mortgages and things so interest rates does not affect their rental price. ...read more.