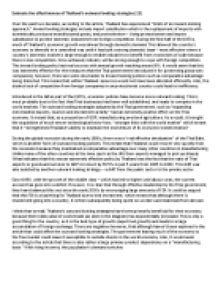 ﻿Evaluate the effectiveness of Thailand?s outward looking strategies [15] Over the past two decades, according to the article, Thailand has experienced ?limits of an inward-looking approach.? Inward looking strategies include import substitution which is the replacement of imports with domestically produced manufactured goods, and protectionism ? Using protectionism and import substitution to protect domestic industries from foreign competition. During the first half of the 1970s, much of Thailand?s economic growth was driven through domestic demand. This allowed the country?s economy to diversify in a controlled way until it has built a strong domestic base ? most effective where a country?s domestic market is large enough to enable industries to benefit from economies of scale because there is less competition. ...read more.

It meant that, as a proportion of GDP, manufacturing overtook agriculture. As a result, it brought the acquisition of much newer technological know-how, ?stronger links with the world market? which meant that it ?strengthened Thailand?s ability to maintain the momentum of its economic transformation? During the global recession during the early 1980s, there was a ?real effective devaluation? of the Thai Baht, which is another form of outward looking policies. This meant that Thailand could recover very quickly from the recession because they maintained a comparative advantage over many other countries in manufacturing. Unlike many of the other countries at the time (such as the UK) their exports managed to pick up sharply. What indicates that this was an extremely effective policy by Thailand was the fact that the ratio of Thai exports or goods and services to GDP increased by 39.5% in just 5 years from 1985 to 1990. ...read more.

I think that overall, Thailand?s outward looking strategies have been primarily beneficial for their economy, because their index value of world trade (as seen in the diagram) has exponentially increased. This is only a good thing for the country, as it is the best type of growth (export led growth) and leads to a large accumulation of foreign exchange. There are negatives however, that although haven?t been explored in the article that could affect the outward looking strategies. The government leaving much of the economy to the free market could leave it susceptible to outside shocks in the world economy. Also, it would seem according to the article that there is also rather a large primary product dependency on a ?manufacturing base.? With rising incomes, the population?s demand switches ...read more.