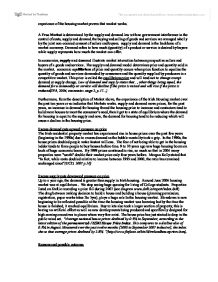 experience of the housing market proves that market works.

A Free Market is determined  by the supply and demand law with no government interference in the control of costs, supply and demand. the buying and selling of goods and services are arranged wholly by the joint non-coerced consent of sellers and buyers.  supply and demand is thebackbone of a market economy. Demand refers to how much (quantity) of a product or service is desired by buyers while supply represents how much the market can offer.

In economics, supply and demand illustrate market interaction between prospective sellers and buyers of a goods and services . The supply and demand model determines price and quantity sold in the market.  economic equilibrium of price and quantity occurs when price function to equalise the quantity of goods and services demanded by consumers and the quantity supplied by producers in a competitive market. This price is called the equilibrium priceand will tend not to change except demand or supply change. Law of demand and supply states that . , other things being equal, the demand for a commodity or service will decline if the price is raised and will rise if the price is reduced(IPA, 2004, economics stage 2, p.17...)

The Irish residential property market has experienced rise in house prices over the past few years (beginning in the 1990s) due to excess demand as the bubble mentality took a grip.  In the 1990s, the house prices doubled people make Instant millions.  The fear of not being able to get in the housing ladder tends to force people to buy houses before time. 9 to 10 years ago saw huge housing boom on back of huge economic boom.  By 1999 prices continued to rise, so much so that in 2004 many properties were "worth" double their market price only four years before.  Morgan Kelly stated that “In fact, while rents doubled relative to income between 1995 and 2000, the ratio has remained unchanged since“(UCD, 2007 p.10)

Up to a year ago, the demand is greater than supply in Irish housing.  Around June 2006 housing market was at equilibrium .  We stop seeing huge queuing for living of College students.  Properties listed on Daft.ie recording a price fall during 2007 (see diagram www.daft.ie/report/index.daft)

The drag between making decision to build a house and building a house (planning permission, registration, paper works takes 2to 3yrs), plays a huge role In the housing market.  Slowdown is now beginning to be reflected possible at the time the housing market was booming but by the time the house is finished, it reached equilibrium.  Buy to lets also took a larger section of property, this is having an artificial effect as well as new developments being produced and specifically designed for high earning executives in places where very few exist.  The house price has just started to drop in the public mind set.  “Average national house prices declined by 0.3% in September, according to the latest edition of the permanent tsb / ESRI House Price Index. This compares to a decline also of 0.3% in August. Measured over the past twelve months [2006 to September 2007 inclusive], the index shows that average prices declined by 2.8% “(http://www.finfacts.ie/biz10/irelandhouseprices.htm).

The recent decline in demand for housing is blamed on the Planning Process by most economists but the response hardly proposes market failure.   Goodbody Stockbroker Dermot O'Leary says in its reportReconstructing Ireland that house prices will fall by 8% in 2008 after a 5% fall this year. (Finfacts.com/irelandbusinessnews Nov 9, 2007, 16:46)

In conclusion, experience of the housing market proves that market works.  For the past 10 years Ireland has experienced a booming economy with people having sufficient income.  The housing price has doubled now compared to about 15 years ago. Market definition focuses on demand (possible consumer responses) and Supply (possible production responses). Supply and demand forces determines the prices of houses ,  from the 1990s to around 2004, the demand for housing was higher than the supply hence contractors build more houses to meet the consumer needs and there was a rise in housing price.  About 5 year ago demand for housing increase along with supply.   Around 2006, the Irish housing market reach equilibrium where supply is equal to demand.  In 2007, there is a decline in the demand for housing and this put downward pressure on price; permanent TSB report that the average Irish housing prices declined by 3.3% measured since the start of this year (finfacts.ie/biz10/Ireland…).  The fundamental point about the market system is that it offers a decentralised, unconscious method of economic organisation (IPA, 2004, economics stage 2. P.10).  The demand, supply and prices for houses in Ireland is achieved as the outcome of the decision of the Irish people, this shows that in Ireland housing market works.