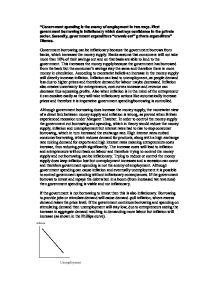 "Government spending is the enemy of employment in two ways. First government borrowing is inflationary which destroys confidence in the private sector. Secondly, government expenditure "crowds out" private expenditure" Discuss. Government borrowing can be inflationary because the government borrows from banks, which increases the money supply. Banks assume that consumers will not take more than 10% of their savings out and on that basis are able to lend to the government. This increases the money supply because the government has borrowed from the bank but the consumer's savings stay the same and therefore there is more money in circulation. According to monetarist beliefs an increase in the money supply will directly increase inflation. Inflation can lead to unemployment, as people demand less due to higher prices and therefore demand for labour maybe decreased. Inflation also creates uncertainty for entrepreneurs, cost curves increase and revenue can decrease thus squeezing profits. Also when inflation is in the mind of the entrepreneur it can escalate easily as they will take inflationary actions like automatically increase prices and therefore it is imperative government spending/borrowing is controlled. ...read more.

This will lead to rises in national income and eventually savings will increase and create extra money for investment and a rise in consumption also. Thus demand for labour will stay the same or increase and therefore public sector borrowing is not the enemy of unemployment. If the government borrows too much then there will have to be increases in taxes, mainly corporation tax and this will also contribute to some unemployment, but the public sector does help employment in some ways. Education and training (funded by the government) provides a skilled, desirable workforce, which will encourage British firms to employ British workers instead of looking for other skilled workers in an increasingly globalized world. The National Health Service also reduces the amount of residual unemployed and therefore contributes to keeping employment levels high. Government borrowing should only occur if for investment purposes and if it will be repaid over the cycle, otherwise it destroys entrepreneur confidence and eventually leads to unemployment. Andrew Catherall. ...read more.