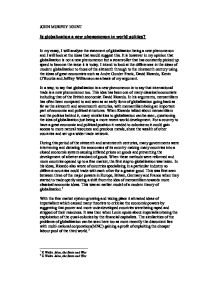 Is globalization a new phenomenon in world politics?

of origin; a basis of globalization has existed.5 Globalization has only become a recent issue as there has been a more dramatic spreading of networks altering the economics and cultures of countries, and has only recently become a 'buzz word'. There are many political and cultural exchanges too that suggest globalization is not merely a new phenomenon. An eighteenth century example of this was when America declared its independence breaking away from rule of the British government and monarchy, a revolution which inspired similar revolutions in Europe such as that of the French Revolution. Even cultures were beginning to spread through the arts, most particularly western influence and exchanges of culture to South America, Africa, parts of Europe and the Middle East. Many religious cultures where exchanged and spread too with many parts of Africa and Japan converting to Christianity. Although on its own this is clearly not enough to state that globalization existed, it is just yet another factor in saying that it did. However, even though it's been argued globalization was clearly under way by the eighteenth century, an alternative argument can be put forward. There is never any dispute over the fact that there was a large global trade network but there is no means that can imply a rise in global trade necessary involves globalization. ...read more.

This is because people where travelling the world as was goods and money, the lives of people where beginning to change, cultures and political ideas where too exchanged. Also, many forms of communication networks were being set up paving the way for even more trading and political exchanges, with Britain leading the way with the adoption of a free trade policy. Although globalization is arguably more dominant now than ever before with more influential factors, the basis of it has existed for over 200 years picking up speed and development with the occasional relapse along the way. In effect globalization now is felt more in the way more countries are affected by it and more MNC's have emerged, a factor that was not really seen for the most part of globalizations development. "Globalization has thus not been a sudden novelty. It goes back to the three last centuries, and went through different stages"8 1 K Waltz. Man, the State and War 2 K Waltz. Man, the State and War 3 (Andre Gunder Frank) Philippe Legrain Open World: The Truth About Globalization 4 Robert O.Keohane and Joseph S.Nye Jr. Globalization: What's New? What's Not?(And So What?) 5 Joseph S. Nye, Jr. Governance in a Globalizing World 6 (Kevin O'Rourke. Jeffrey Williamson) Phillipe Legrain Open World: The Truth About Globalization 7 John Baylis Globalization of World Politics 8 R. Robertson Globalization: Social Theory and Global Culture ...read more.