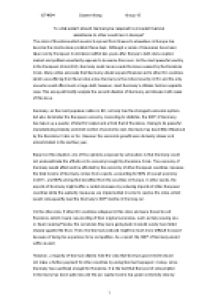 To what extent should Germany be required to provide financial assistance to other countries in Europe?

﻿1274904 Qiuwen Wang Group 15 To what extent should Germany be required to provide financial assistance to other countries in Europe? The crisis of Eurozone which seems to spread from Greece to elsewhere in Europe has become the most serious problem these days. Although a series of measures have been taken out by European Commission within two years after Europe?s debt crisis erupted, market and political uncertainty appears to be worse than ever. As the most powerful country in the European Union (EU), Germany could never evade the issue caused by the Eurozone Crisis. Many critics advocate that Germany should expand financial aid to other EU countries which are suffering from fiscal crisis since Germany is the richest country in EU and the only one who could afford such a huge debt, however, most Germany?s citizens hold an opposite view. ...read more.

In other words, the exports of Germany might suffer a certain decrease by reducing imports of other European countries while the austerity measures are implemented in order to resolve the crisis, which would consequently lead the Germany?s GDP decline in the long run. On the other side, if other EU countries collapsed in this crisis and were forced to exit Eurozone, which means resurrecting of their original currencies, such as Italy reusing Lira or Spain reusing Peseta, the currencies they were going back to would surely have fallen sharply against the Euro. Then, the German products might be much more difficult to export because of being too expensive to be competitive. As a result, the GDP of Germany would suffer as well. However, a majority of German citizens hold the view that German government should not make a further payment for other countries by using German taxpayers? money, since Germany has sacrificed enough for Eurozone. ...read more.

In addition, it is impossible for Germany to solve the debt crisis thoroughly by constantly providing finance for other countries, which seems like a bottomless pit. The national debt of Germany has increased to ?2 million until 2011, accounting for more than 80% of GDP , which has exceeded the stipulated 20% of the percentage in Convergence Conditions. In other words, if Germany continued to give financial assistance to other countries, it might have to struggle to reduce its own debts. In general, Germany should provide financial assistance to other countries, but not to the extent of sacrificing itself and aggravating its own debts. Perhaps, Germany could provide other forms of aid such as establishing a scientific welfare system, introducing an advanced industrial technique or offering a better banking regulatory framework rather than just financial assistance. After all, it is not the Germany?s responsibility to resolve the Eurozone Crisis. The countries that were plunged into crisis should take responsibilities for themselves. ...read more.