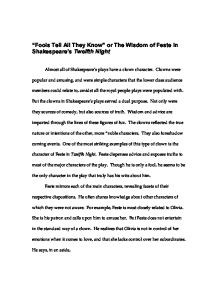 "Fools Tell All They Know" or The Wisdom of Feste in Shakespeare's Twelfth Night Almost all of Shakespeare's plays have a clown character. Clowns were popular and amusing, and were simple characters that the lower class audience members could relate to, amidst all the royal people plays were populated with. But the clowns in Shakespeare's plays served a dual purpose. Not only were they sources of comedy, but also sources of truth. Wisdom and advice are imparted through the lines of these figures of fun. The clowns reflected the true nature or intentions of the other, more "noble characters. They also foreshadow coming events. One of the most striking examples of this type of clown is the character of Feste in Twelfth Night. Feste dispenses advice and exposes truths to most of the major characters of the play. Though he is only a fool, he seems to be the only character in the play that truly has his wits about him. Feste mirrors each of the main characters, revealing facets of their respective dispositions. He often shares knowledge about other characters of which they were not aware. For example, Feste is most closely related to Olivia. She is his patron and calls upon him to amuse her. But Feste does not entertain in the standard way of a clown. He realizes that Olivia is not in control of her emotions when it comes to love, and that she lacks control over her subordinates. ...read more.

In the context of the play, Sir Toby plays more the part of the classic fool than Feste. He is merely a comic figure with no more depth to him than that of the stock drunkard. Feste is the genius of the play, but is not noble, and so does not really fit in anywhere. Sir Toby and Sir Andrew treat Feste as both a friend and a servant, paying him to sing, but requesting his company and help in their practical jokes. Feste reveals his foreknowledge about events to come in his song to Sir Toby, O mistress mine, where are you roaming? O stay and hear, your true love's coming That can sing both high and low Trip no further pretty sweeting Journey's end in Lover's meeting Every wise man's son doth know." (2.3.36-40) Feste reveals to these two drunkards the plot of the entire play. Of course, they do not understand and simply praise Feste's singing ability, but, nevertheless, he has revealed his wisdom and knowledge about the other characters. Later in the play, they request that Feste dress up as a wise man to fool Malvolio into thinking he has lost his wits. Feste humbly obliges and does so, playing the part willingly and well. Shakespeare's characters love to disguise themselves; this theme is often important to the plot of his comedies, but in this case, the disguise takes an ironic turn. ...read more.

These two are certainly the most charming characters of the play and their dialogue reveals as much. Both know a little about the other's true nature, and are not afraid to share their knowledge with each other. Feste prefers Viola (as Cesario) to Orsino as a suitor for his mistress, and so tries to help win her, and mistakenly, Sebastian, to Olivia's favor. Feste seems to grow tired of his fool's role in the play. By Act three he declares, "Words are grown so false, I am lost to make reason with them," (3.1.22-3). He has an air of resignation in his lines towards the end of the play, ultimately leading up to his final epilogue. This song chronicles his life, in a melancholy way, ending with, " But that's all one, our play is done/ And we'll strive to please you every day." Feste's final words are riddled with melancholy; he is doomed to always play the fool, to never be free of the constraints of the play. As a fool, Feste has all the necessary qualities: singing, impersonation, joke-telling. But, as a character, he is much more than a jester. He is the key to Twelfth Night. He gives the play depth and substance that other comedies do not contain. He weaves all the worlds of the play together with witty words and melancholy ballads. Feste is the binding element in an otherwise contrived and ordinary play. ...read more.