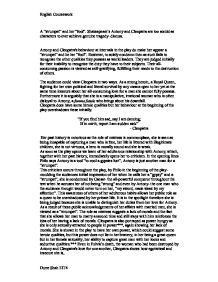 A "strumpet" and her "fool". Shakespeare's Antony and Cleopatra are too sordid as characters to ever achieve genuine tragedy- discuss. Antony and Cleopatra's behaviour at intervals in the play do make her appear a "strumpet" and he her "fool". However, to solely condemn then as such fails to recognise the other qualities they possess as world leaders. They are judged initially for their inability to recognise the duty they have to their subjects. Their all-consuming passion is viewed as self-gratifying, fulfilling their needs to the destruction of others. The audience could view Cleopatra in two ways. As a strong heroin, a Royal Queen, fighting for her own political and literal survival by any means open to her yet at the same time insecure about her all-consuming love for a man she cannot fully possess. Furthermore it is arguably that she is a manipulative, irrational woman who is often disloyal to Antony, a femme fatale who brings about his downfall. ...read more.

Cleopatra is also portrayed as power hungry as she is only s******y attracted to people in power***, again showing her lack of morals. She is shown in the play to have her own power, which could suggest some heroic qualities, but this power does not lie in her bravery, in her being a great queen but in her female sexuality, her ability to capture great men with her looks and seductive qualities.*** Even in Fulvia's death, the woman who had been destroyed by Antony and Cleopatra's love for one another, Cleopatra shows how egotistical and insecure she is, "I see, in Fulvia's death How mine received shall be" She reflects on her own situation, showing how self-absorbed she is. She then shows her vanity by comparing herself to Fulvia. However all of this could be attributed to her jealousy, which reflects the extent of her love for Antony. Cleopatra also shows herself to be very temperamental in the play. ...read more.

"Women are not in their best fortunes strong" Even the great Caesar accuses her of being weak, but Cleopatra proves them all wrong by not only supporting herself but Antony too. To continue supporting someone in the face of death *** shows her bravery and how much she truly does love Antony. "Did I, Charmian, ever love Caesar so?" Her heroism really comes through when she decides to take her own life: " Where art thou, death? Come hither, come!" this could be seen as cowardly but her reasons for doing so are to take control from Caesar and from death. She would rather kill herself than let Caesar parade through the town with her as a prize. Just before death she has a final moment of pleasure when she mocks Caesar. The fact that she never really lets Caesar capture her is one thing but she takes away Caesar's opportunity to kill her and lets a clown do it. She is mocking Caesar with this clown, he is supposed to be all-powerful, but even a clown could do his job. English Coursework Durre Shah 12T4 ...read more.