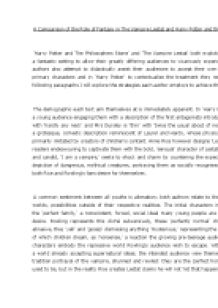 ﻿A Comparison of the Role of Fantasy in The Vampire Lestat and Harry Potter and the Philosophers Stone 'Harry Potter and The Philosophers Stone' and 'The Vampire Lestat' both exploit the freedom provided by a fantastic setting to allow their greatly differing audiences to vicariously experience desirable roles, both authors also attempt to didactically assist their audiences to accept their own flaws represented in the primary characters and in 'Harry Potter' to contextualise the treatment they receive from others. In the following paragraphs I will explore the strategies each author employs to achieve this. The demographic each text aim themselves at is immediately apparent. In 'Harry Potter' J.K Rowling targets a young audience engaging them with a description of the first antagonists introduced; Mr Dursley is 'beefy' with 'hardly any neck' and Mrs Dursley is 'thin' with 'twice the usual about of neck' contrasting the pair in a grotesque, comedic description reminiscent of Laurel and Hardy, whose physical style of humour is now primarily imitated by creators of children's content. ...read more.

These characters embody the repressive world Rowling's audience wish to escape. With 'Lestat' Rice introduces a world already accepting supernatural ideas; the intended audience view themselves as analogous to the tradition portrayal of the vampire, shunned and reviled: they are the 'perfect horror('s)' Lestat explains he used to be, but in the reality Rice creates Lestat claims he will not 'let that happen now,' in Lestat's universe the once derided, loathed vampires are free and even worshipped. Rice welcomes her nonconforming readers to enjoy Lestat's success: his '4 million' fans and his 'Rock Star' status. This contrasts 'Harry Potter's' opening: the 'Lestat' readership enjoy an amiable beginning, led by a confident although egotistic narrator while 'Harry Potter' fans experience the alienation later received by the protagonist, strengthening their identification with him, something that may not be obtained in 'Lestat.' Due to the differing audience, each author employs variants of popular culture most relevant to their respective target age groups. ...read more.

This humanisation is amplified further when Lestat's 'transparent' skin is described, he espouses the need for it to be hidden beneath make-up, which further characterises him as narcissistic but could also be Rice's own metaphorical acknowledgement of the 'transparent' nature of the character she has created and impels the reader to continue onward with promises of a multifaceted, imperfect character with whom the reader can familiarise and to whom they can bond. In 'Harry Potter,' Rowling too makes pellucid promises, here of a quintessential magical journey of a blithesome bildungsroman and literate, map reading cats, naturally appealing to any child (or adult) lacking in literary aptitude. The introductions to both of these texts utilise their fantasy genre in opposite ways. 'Lestat' venturing to provide extreme escapism for a confused, teenage demographic desiring an authoritative, illuminating guide who has already overcome the hostilities with which they currently contend and must learn to conquer. While 'Harry Potter' attempts to mirror common childhood experiences, allowing edification of courage and understanding in and of personal adversity. (Word-count: 790) ...read more.