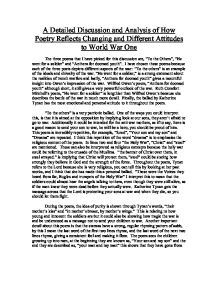 A Detailed Discussion and Analysis of How Poetry Reflects Changing and Different Attitudes to World War One.

A Detailed Discussion and Analysis of How Poetry Reflects Changing and Different Attitudes to World War One The three poems that I have picked for this discussion are, "To the Others", "He went for a soldier" and "Anthem for doomed youth". I have chosen these poems because each of the three poets depicts different aspects of the war: "To the others" is an example of the ideals and chivalry of the war. "He went for a soldier," is a strong statement about the realities of trench warfare and lastly, "Anthem for doomed youth" gives a mournful insight into Owen's impression of the war. Wilfred Owen's poem, "Anthem for doomed youth" although short, it still gives a very powerful outlook of the war. Ruth Comfort Mitchell's poem, "He went for a soldier" is lengthier than Wilfred Owen's because she describes the battle of the war in much more detail. Finally, the ballad by Katherine Tynan has the most emotional and personal attitude to it throughout the poem. "To the others" is a very patriotic ballad. One of the ways you could interpret this, is that it is aimed at the opposition by implying look at our sons, they aren't afraid to go to war. Additionally it could be intended for the anti war mothers, as if to say, there is a good reason to send your son to war, he will be a hero, you should be proud of him. ...read more.

"Your son and my son, clean as new swords" is suggesting that their sons are pure and have done well, "clean as new swords" also refers to chivalry. "He went for a soldier" is an unusual poem in that during the first two stanzas, the character Billy is chirpy as he sets off to war, "To the gay, bold tune they kept a-drumming there." However, in the remaining stanzas, the atmosphere is quite the opposite; it becomes morbid very quickly. At the end of each stanza, "Billy, the soldier boy!" is repeated, I think that this is to emphasise how young Billy is. Another projection of Billy's youth and innocence through the poem is: "Oh, the pretty girls he glimpsed a-crying there" and "Blushing under the cheers." The fact that they are referred to as girls and not women shows that the people waving good-bye were young, like Billy. In addition, the blushing could be another indication of his age. The last three stanzas consists of many references to strong, brutal imagery, "the ground all around is smeared with the gore of him" it has gone from cheerful to reality. In reality, the war is very different to what everybody at home thinks about it, they think that Billy is being a hero and is going to return, but in reality, Billy is not going to come back. ...read more.

Owen was put in a mental hospital; this poem talks about, "the shrill, demented choirs" and "their flowers the tenderness of patient minds" both are references to ill suffering, mental patients. The first stanza is written in a style of an angry adult, how he hates war because of the death and guns, "monstrous anger of the guns." However, in the second stanza it is like a timid little boy is writing of his discontent, the language is very simple, and he talks of people dieing a more peaceful death than in the first stanza, "and each slow dusk a drawing down of blinds." It is as if the poet missed his childhood due to war. This is yet another example of how the poem is based on Wilfred Owen's own life. The three poems that I selected show various attitudes to war through their use of language, the rhyming, their descriptions and their opinions and own experiences. "To the others" encourages our patriotic determination to go and fight in the war, "He went for a soldier" is matter-of-fact to begin with, but reverses the approach with a sense of real events and "Anthem for doomed youth" just persuades people not to join the army. Katherine Tynan also spent her time fighting in the war, however, unlike Owen, she was not on the front line and she did not get sent to a mental asylum, so her view on the war will be unlike Owens' in some respects. ...read more.