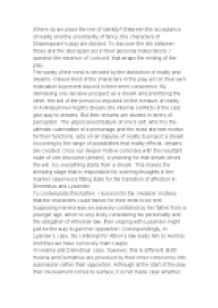 A Midsummer Night's Dream - motivation of the characters

﻿Where do we place the line of identity? Between the acceptance of reality and the uncertainty of fancy, the characters of Shakespeare?s play are divided. To discover the link between those and the discrepancies in their personal indiscretions, I question the essence of ?concord? that wraps the ending of the play. The sanity of the mind is decided by the distinction of reality and dreams. Indeed most of the characters in the play act on their own motivation to prevent discord in their inner conscience. By dismissing one decisive prospect as a dream and prioritizing the other, the will of the person is imposed on the medium of reality. In A Midsummer Night?s Dream, the internal conflicts of the cast give way to dreams. But their dreams are divided in terms of perception. The unperceived feature of one?s self, which is the ultimate culmination of a personage and the most discreet motive for their functions, acts on an impulse of reality to project a dream. ...read more.

In Helena and Demetrius? case, however, this is different. Both Helena and Demetrius are provoked by their inner conscience into submission rather than opposition. Although at the start of the play their involvement comes to surface, it is not made clear whether they had intercourse or not. It is possible that their sense of inferiority developed due to premature biological maturity but then again it is also possible that Demetrius preferred to conform to Egeus? expectations of marrying Hermia. What follows from there is probably Helena?s sense of inferiority at Hermia having both Demetrius and Lysander?s affections to herself. This composes the basis for the most developed character during the course of this play: Helena. Taking Helena?s persona in close detail, we can a construct a woman, with an inferiority complex who is envious of her sister-like friend. Back in those days, females were seconded to males? opinions, so they had to submit. ...read more.

It may be because his mind was abnormal to the cause: trying to win over both the maidens, so external interference was essential. Bottom?s reaction to his experience was much more different compared to the leading lovers. Instead of being controlled by the perception of a dream, he derived a sort of reality from it and made use of it in his ballad. Trying to adapt to the illusionary world of dramatizing must have helped him come into terms with it; as every experience whether real or imaginary can teach us something. All that matters is how we view it. At the end of the forest scene, when Thesus overrules Egeus? order, he satisfies the condition for both our main characters to get a happy ending. Lysander gets to witness Athenian law being broken and Hermia gets to force her way over her father?s decision. This, under the guise of triumphed love, is all well for us to enjoy and for the characters to play. ...read more.