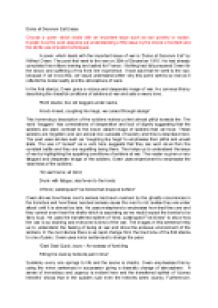 A poem which deals with the important issue of war is Dulce et Decorum Est by Wilfred Owen.

﻿Dulce et Decorum Est Essay Choose a poem which deals with an important issue such as war poverty or racism. Explain how the poet deepens out understanding of the issue by the choice of content and the skilful use of poetic techniques. A poem which deals with the important issue of war is ?Dulce et Decorum Est? by Wilfred Owen. The poet first went to the war on 30th of December 1916. He had already completed his military training and sailed for France. Nothing had fully prepared Owen for the shock and suffering of his front line experience. I have said that he went to the war, because if we know this, we would understand better why this poem seems so real as it reflects the brutal reality and the atmosphere of wars. In the first stanza, Owen gives a vicious and desperate image of war. He conveys this by describing the dreadful conditions of soldiers at war and sets a weary tone: ?Bent double, like old beggars under sacks, Knock-kneed, coughing like hags, we cursed through sludge? This horrendous description of the soldiers makes us feel almost pitiful towards the. The word ?beggars? has connotations of desperation and lack of dignity suggesting that the soldiers are stark contrast to the brave valiant image of soldiers that we have. ...read more.

A sense of immediacy and urgency is evident here and the transferred epithet of ?clumsy helmets? shows that in the sudden rush even the helmets seem clumsy. Furthermore, there is a change in rhythm from the iambic pentameter of the first stanza into one of chaos almost symbolising the atmosphere of the trench. Our understanding of the urgency of war is deepened here and the reader is given insight into how risky the soldiers lives are. The poet uses imagery to illustrate his memories. The man being choked to death by the gas is almost in slow motion as the event happen: ?But someone still was yelling out and stumbling... As under a green sea, I saw him drowning.? This whole sequence of events is described by Owen in great detail showing that the images of the man?s pain seem fresh in Owen?s mind showing and that they have emotionally scarred him and he will never be able to forget seeing this soldier dying. The word ?someone? shows the anonymity of the soldiers and emphasises how many soldiers are simply forgotten. ?But? shows that not everyone was able to fit their helmet in time and the soldier was too late and is seen only through the "green sea" of mustard gas, "yelling... ...read more.

Owen highlights the severity and lasting effect of war and violence on the soldiers and this helps the reader to understand what happens at war and the effect of war. Owen ends the poem with a Latin expression taken from the odes of the roman poet Horace: ?To children ardent for some desperate glory The old lie: Dulce et decorum est Pro patria mori.? The fact that the war recruits are only ?children? makes the reader question the justification of sending people to war. The poet is saying that the men only go into war to be war heroes, yet, they are forgotten and forced through horrendous conditions. Throughout the poem there has been around ten syllables per line and the last line has only six and I think that the missed beats give the reader time to think about the poem as a whole. The Latin used at the end of the poem means 'It is sweet and honourable to die for your country', a concept Owen is strongly denying throughout the poem. ?Dulce et Decorum Est? is a poem which gives a very insightful and realistic view of war. I think that Wilfred Owen did not use the full phrase ?Dulce et decorum est Pro patria mori? in order to allow the reader to decide for oneself whether they agreed or disagreed with him in the end. ...read more.