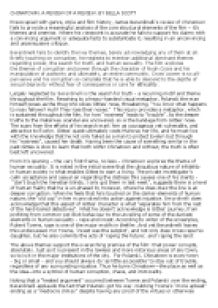 A review of James Berardinellis review of Chinatown

﻿CHINATOWN. A REVIEW OF A REVIEW. BY BELLA SCOTT Preoccupied with genre, style and film history, James Berardinelli?s review of Chinatown fails to provide a meaningful analysis of the core structural elements of the film ? it?s themes and premise. Where his viewpoint is accurate he fails to support his claims with a convincing argument or adequate facts to substantiate it, resulting in an unconvincing and unpersuasive critique. Berardinelli fails to identify the key themes, barely acknowledging any of them at all. Briefly touching on corruption, he neglects to mention additional dominant themes regarding power, the search for truth, and human sexuality. The film explores the themes of corruption and power through the character of Noah Cross and his manipulation of authority and ultimately, an entire community. Cross? power is so all-pervasive and his corruption so complete that he is able to descend to the depths of s****l depravity without fear of consequence or care for ethicality. Largely neglected by Berardinelli is the search for truth - a recurring motif and theme throughout the film. ...read more.

The private investigator?s calm acceptance and casual air regarding the distress this causes one of his clients - ?don?t touch the Venetian blinds, I only got them in last week?, suggests there is a level of human frailty that he is un-phased by however, where he does draw the line is at deeper corruption. When he feels that he?s touched on the darker elements of human nature, the ?old cop? in him is provoked into action against injustice. Berardinelli does acknowledge that this aspect of Gittes? character is what ?separates him from the rest of the hard-boiled detectives?. What he doesn?t acknowledge is Gittes? journey, from profiting from common yet illicit behaviour to the unveiling of some of the darkest elements in human sexuality - r**e and incest. According to writer of the screenplay, Robert Towne, r**e is one of the major motifs in thefilm. And yet Berardinelli leaves this undiscussed. For Towne, ?incest was the subplot?, and not only does Cross r**e his daughter, but he also commits the acts of ?r****g the future?, and ?r****g the land?. ...read more.

The ending of Chinatown feels fake and overly theatrical. With the full cast assembled for the final scene in an awkward and unbelievable mix of crass, contrived coincidences, it?s here that Polanski?s complete control and mastery of his craft descends into a dictatorial diatribe that reflects more on the nature of the man than on the harsher realities of life that he alluded to so artfully until this final act. It is a scene that is fatal for the heroine, for Gittes? hope for a more just world, and for the audience?s total abandonment to an otherwise sublimely immersive story. Despite these flaws, the conclusion is effective in cementing Polanski?s bleak, pessimistic vision of a world where the powerful will always prevail through their preparedness to break all the rules of decency that dictate how most of the hapless masses behave. In his statement regarding the conclusion, ?involving events that have nothing to do with the big picture?, Berardinelli couldn?t be further from the truth, nor further from expressing it eloquently. He acknowledges that the film ?works as both a mystery and an exploration of a deeper, more personal tragedy? but appears to miss it?s true meaning entirely. ...read more.