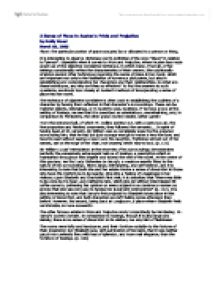 A Sense of Place in Austen's Pride and Prejudice

A Sense of Place in Austen's Pride and Prejudice by Emily Wood March 03, 2003 Place: The particular portion of space occupied by or allocated to a person or thing. It is interesting to observe Dictionary.com's definition of the word "place" in relation to "person". Especially when it comes to Pride and Prejudice, where Austen has made great use of the objective correlative technique, in which many, if not all, of her settings considerably reflect the characteristics of their owners. She additionally employs several other techniques regarding the sense of place in her novel, which are important not only in the facilitation of numerous plot points, but also in establishing and understanding her characters and their relationships. So what are these techniques, and why are they so effective? To find the answers to such questions, we should look closely at Austen's methods of incorporating a sense of place into her novel. The technique of objective correlative is often used in establishing the qualities of a character by having them reflected in that character's surroundings. These can be material objects, belongings, or in Austen's case, locations. If we take a look at the setting of Rosings, we see that it is described as ostentatious, overwhelming, and, in comparison to Pemberley, the other grand country estate, rather garish: From the entrance hall, of which Mr. Collins pointed out, with a rapturous air, the fine proportion and finished ornaments, they followed the servants.... ...read more.

Darcy himself. Though at first seemingly proud and haughty, he is in actuality a decent fellow, well-dressed (though not overly showy), and very down to earth. Through this description of Pemberley, we see Elizabeth's comfort in her surroundings (as opposed to her unease at Rosings), and once again, through this technique, are able see (from later in the book) that she will be at ease with Mr. Darcy himself. Almost all of the settings in Pride and Prejudice reflect their owners effectively, with Longbourn House being relatively plain and simple, similar to Mr. and Mrs. Bennet; Brighton, the loud and flashy seaside town where Lydia ends up with Wickham; and lesser-known settings such as Ramsgate, a quiet and isolated place in Kent, much like Georgiana Darcy herself. Other than the usage of the objective correlative, Austen creates a sense of balance in her story by having several notable events occur outside, while other, less significant events take place in the interior. Events such as Darcy's giving of the letter to Elizabeth, numerous encounters, and his infamous second proposal occur during walks outside in the garden. This is most interesting, as it is the events that take place in the vast open spaces of the garden that accumulate to the important decisions regarding Elizabeth's future, whereas less important events, such as Mr. Collins' proposal, occur within the boundaries of the inner recesses. ...read more.

Wickham), each party must first think about the right thing to say, and thus eliminate any sense of spontaneity. This allows for many other events to take place, such as misunderstandings between characters, and delays a lot of the action, ensuring that mistakes cannot be corrected immediately. For instance, if Jane and Elizabeth were constantly in the same place, the latter would simply be able to tell Jane of her misapprehensions regarding Miss Bingley, and much of that storyline would be lost. Pride and Prejudice is a novel in which Jane Austen has used several techniques concerning the sense of place to create a fine novel of mannerisms, misjudgements, and mayhem. Through usage of the objective correlative, readers can gain a great deal of insight into the characters themselves, and thus further enjoy the novel with an enhanced understanding of Austen's creations. She also establishes a sense of balance by having the more influential events of the story take place in the openness of the great outdoors, and those of less import occur within the boundaries of the inside. Additionally, Austen has her characters travel to various parts of Great Britain, which allows for correspondence in the form of letters (serving to facilitate the necessary delay of action) and for mistakes to be made. Austen has made great use of the sense of place in Pride and Prejudice, and her techniques coalesce to deepen the reader's understanding, to give a sense of balance, and to effectively enhance the enjoyment of a delightful story. ...read more.