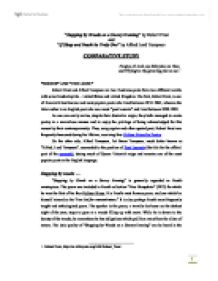 "Stopping by Woods on a Snowy Evening" by Robert Frost and "If Sleep and Death be Truly One" by Alfred Lord Tennyson COMPARATIVE STUDY Forgive, O Lord, my little jokes on Thee, and I'll forgive Thy great big joke on me.1 "MISTER" AND "THE LORD " Robert Frost and Alfred Tennyson are two illustrious poets from two different worlds with some kindred spirits - United States and United Kingdom. The first, Robert Frost, is one of America's best known and most popular poets who lived between 1874-1963, whereas the latter author is an English poet who was made "poet laureate" and lived between 1809-1892. As one can easily realise, despite their dissimilar origin, they both managed to create poetry in a marvellous manner and to enjoy the privilege of being acknowledged for this reason by their contemporaneity. Thus, very popular and often-quoted poet, Robert Frost was frequently honoured during his lifetime, receiving four Pulitzer Prizes for Poetry. On the other side, Alfred Tennyson, 1st Baron Tennyson, much better known as "Alfred, Lord Tennyson", succeeded to the position of Poet Laureate (the title for the official poet of the monarch), during much of Queen Victoria's reign and remains one of the most popular poets in the English language. Stopping by woods ... "Stopping by Woods on a Snowy Evening" is generally regarded as Frost's masterpiece. The poem was included in Frost's collection "New Hampshire" (1923) for which he won the first of his four Pulitzer Prizes. It is Frost's most famous poem, and one which he himself viewed as his "best bid for remembrance." It is also perhaps Frost's most frequently taught and anthologized poem. ...read more.

Why is he so concerned about being seen stopping by the woods? Is it simply because he fears he will be accused of trespassing on someone else's property? Perhaps he feels guilty that he has temporarily suspended his business and does not wish to be seen or see himself as someone who shirks responsibility. Or it could be that he feels guilty for indulging in a fantasy, for he is attracted to something he feels he should resist. It is hard to say what the woods represent for the man - rest, death, nature, beauty, solitude, oblivion - but it is clear that he feels he should not allow himself to give in to his desire to stay there. There is moreover a s****l dimension to his fantasy: the feminine woods ("lovely, dark and deep") are set against a world of men where promises must be kept - the world of property and business. Whatever depths "Stopping by Woods" possesses, it gives us the impression of simplicity. How does the poem manage this? Most obviously, its language remains conversational throughout and it generally avoids twisting around the word order of spoken speech. "Stopping by Woods" also contains only one word with more than two syllables. When the poem does alter the expected word order, as in "Whose woods these are I think I know," the sound and the sense of the line help us forget that there is anything odd going on. Caught in the flow of the poem, we tend not to notice that the lines "Between the woods and frozen lake / The darkest evening of the year" neither follow logically from the lines that come before them nor form a complete sentence on their own. ...read more.

If so, he still understands "figured" of surface-markings, not of the shape of the outline. But he claims that the new idea which enters with these lines is to be found in "garden" and "total world" not in "figured leaf". Another two points of interest for critics are "in Time" and "prime". The professor Bradley considers that the first is a metaphor for the earthly life and the second for the daybreak, when the sleep of the soul is over. However the interpretation, whether right or wrong, the entire oeuvre "In Memoriam" anticipates electronic hyper-textuality precisely by challenging narrative and literary form based upon it. Convinced that the thrust of elegiac narrative, which drives the reader and the mourner relentlessly from grief to consolation, falsified his own experiences, the poet constructed a poem of 131 fragments to communicate the ebb and flow of emotion, particularly the way the aftershocks of grief irrationally intrude long after the mourner has supposedly recovered. In the end of our educational essay, we cannot but admit that both poems are similar to the quicksand: so fascinating to explore, but never reaching the core. Whether is death, whether is sleep, whether is flower or just a snow, both Robert Frost and Alfred Lord Tennyson expressed marvellously their own feelings when they had to face with a great loss. Furthermore, they managed through their poetry to be so topical and to be read nowadays with the same interest as they were on their "Time", and that for "sleep never fades away". 1. Robert Frost, http://en.wikiquote.org/wiki/Robert_Frost. 2. http://www.enotes.com/poetry-criticism/stopping-by-woods-snowy-evening-robert-frost 3. http://www.pbs.org/wgbh/poetryeverywhere/frost.html 4. http://www.victorianweb.org/authors/tennyson/im/kuzmowycz12.html 5. Monte Steven, in an essay for Poetry for Students, http://www.answers.com/topic/stopping-by-woods-on-a-snowy-evening-poem-7. 6. Bradley A.C., A Commentary on Tennyson's In Memoriam, Macmillan and Co, London, 1907, page 124-125, http://www.archive.org/details/commentaryontenn00bradrich ?? ?? ?? ?? ...read more.