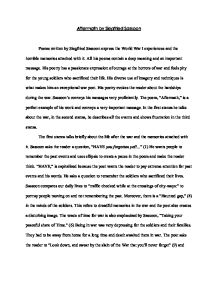 Aftermath by Siegfried Sassoon Poems written by Siegfried Sassoon express the World War I experiences and the horrible memories attached with it. All his poems contain a deep meaning and an important message. His poetry has a passionate expression of outrage at the horrors of war and feels pity for the young soldiers who sacrificed their life. His diverse use of imagery and techniques is what makes him an exceptional war poet. His poetry evokes the reader about the hardships during the war. Sassoon's conveys his messages very proficiently. The poem, "Aftermath," is a perfect example of his work and conveys a very important message. In the first stanza he talks about the war, in the second stanza, he describes all the events and shows frustration in the third stanza. The first stanza talks briefly about the life after the war and the memories attached with it. Sassoon asks the reader a question, "HAVE you forgotten yet?..." (1) He wants people to remember the past events and uses ellipsis to create a pause in the poem and make the reader think. ...read more.

It's ironic as he compares war to a b****y game because it is supposed to be enjoyable. Lastly, the first stanza refers to civilian life and one shouldn't forget about the past events that happened during war. Sassoon talks about the events that took place during the war and the obstacles the soldiers had to go through everyday. The repetition of "You," (10) is used to grasp the reader's attention into the poem. Then he begins to mention about the war and the daily activities. He uses "And" (11) to creatively show the daily activities that never stopped and continued on. "The nights you watched and wired and dug and piled sandbags on parapets?" (11) This shows that their work was tedious, in the mud and never stopped. In addition, the vivid and disgust imagery helps show their working environment, "Of corpses rotting in front of the front-line trench" (13) One can easily scent this scene and can visualize the images involved during the war. ...read more.

He shows a child's life turned into a nightmare, "Masks of the lads who once were keen and kind and gay." (21) There is an idea of individual characteristic being stripped away due to war and the mask representing death. The last line of the poem, "Look up, and swear by the green of the spring that you'll never forget." (23) This shows that one shouldn't forget about the past events. Lastly, this stanza shows the frustration and anger of soldiers die and others who terribly miss their loved ones. Aftermath by Sassoon is an exceptional poem and talks about the horrors of war. He tells his experiences and opinions with such clarity and creates a sorrow atmosphere. In the first stanza he shares his experiences about the war, describes the events in the second stanza and shows a sense of frustration and anger in the third stanza. He cautions the reader not to forget the losses and horrors of war. This poem helps aid those who have been in war or have lost their loved ones. In conclusion, Sassoon is an exceptional poet and shows the aspect of human suffering during the war and its impacts. ?? ?? ?? ?? ...read more.

A very well written and detailed analysis of the poem. Writer clearly understands and knows poem well and makes some thoughtful and perceptive comments which are well supported by appropriate comments. Deeper analysis of language needed in places, and occasional lapses in expression, but this is a thoughtful and well structured essay.