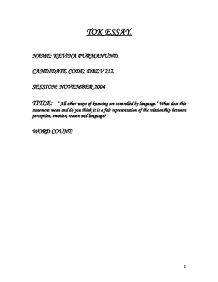 &quot; All other ways of knowing are controlled by language.&quot; What does this statement mean and do you think it is a fair representation of the relationship between perception, emotion, reason and language?

Let's assume that I am in love and to express my love to my beloved one I can express it verbally; " I love you". But the power of the language is not adequate, as it can't convey the intensity of my emotions. I can only understand my love. Although a language has power to express emotions, the emotion goes far beyond the reach of language. But perhaps some languages do this better than others and this is a limitation as it is sometime out of our reach. I think that Italian would be a good language as it appears very romantic to me. However poets and dramatist has the ability to portray emotions brilliantly through language by using figures of speech and rhythms to strengthen their sentiment. For instance Keats has the ability to express his emotions of his desperate love affairs through his poetry. In some of Keats odes we feel that he is trying to express his desperate feeling of love and he convey these emotions wonderfully through an intense language. So we can say that language has some power over our emotions and again we can see that language is an important mean of expression especially when it comes to feelings. But not every person, in life can be a great poet or playwrights like Keats or Shakespeare. ...read more.

It is true that some ways of knowing are controlled and relies a lot on a language, but there are others means, which are not dependant on language. I think it depends a lot on the individual, as some might rely more on a language while they perceive, think and feel an emotion and others might not. Recently I asked the class if they could imagine a world without a language and this was their response " We would not be here if a language did not exist." I personally think that a language is essential, even if it has its limitation and that we human beings have to accept it the way it is, as it is already part of our lives and controlling our mind, gestures and all actions. Bibliography: - Books : - - Micheal Woolman, Ways of knowing. Australia: IBID press Victoria: 2000. - Allott, R. The great mosaic Eye: Language and Evolution Chapter I. Book Guild: 2001. (Notes from Mr Muddle). - Della Thompson. The concise Oxford Dictionary. New York, Oxford university press: 1995. - Horner and Westacott. Thinking through philosophy. UK, Cambridge university press: 2001- philosophy of art: page 197. Internet: - Accessed dates (06/05/04 and 09/07/04) - The American Heritage(r) Dictionary'. Language: http://www.bartleby.com/61/14/L0041400.html. - The Sapir-Whorf Hypothesis. Edward Sapir, Notion of Codability and Linguistic determinism http://venus.va.com.au/suggestion/sapir.html Additional Materials: - - Notes on language by Mr Muddle the Headmaster. - Class notes. ...read more.