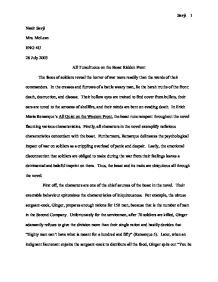 All Tumultuous on the Beast Ridden Front.

Nazir Savji Mrs. McLean ENG 4U 28 July 2003 All Tumultuous on the Beast Ridden Front The faces of soldiers reveal the horror of war more readily than the words of their commanders. In the creases and furrows of a battle weary man, lie the harsh truths of the front: death, destruction, and disease. Their hollow eyes are trained to find cover from bullets, their ears are tuned to the screams of shellfire, and their minds are bent on evading death. In Erich Maria Remarque's All Quiet on the Western Front, the beast runs rampant throughout the novel flaunting various characteristics. Firstly, all characters in the novel exemplify nefarious characteristics concordant with the beast. Furthermore, Remarque delineates the psychological impact of war on soldiers as a crippling overload of panic and despair. Lastly, the emotional disconnection that soldiers are obliged to make during the war from their feelings leaves a detrimental and baleful imprint on them. Thus, the beast and its traits are ubiquitous all through the novel. First off, the characters are one of the chief sources of the beast in the novel. Their execrable behaviour epitomizes the characteristics of iniquitousness. ...read more.

I have run eight times from the top floor of the barracks down to the courtyard in my shirt at two o'clock in the morning because my drawers projected three inches beyond the edge of the stool on which one had to stack all one's things" (Remarque 23) From these tedious and excruciating ordeals, it is patent that not only is Corporal Himmelstoss wicked, but also heinous in his treatment of his fellow soldiers. From these paradigms of atrociousness, it can be deciphered that some characters in the novel possess a demonic beast within themselves. Another very ascendant beast in the novel is the virulent impact war has on armed forces. Both physically and mentally, war maims soldiers; it drubs fear in those who encounter it first hand. For instance, after a close encounter with death, Paul remarks "After this affair the sticky, close atmosphere works more than ever on our nerves. We sit as if in our graves waiting for death" (Remarque 110). These men are subject to constant physical danger, as they could literally be blown to pieces at any moment. This intense physical threat also serves as an unceasing attack on the nerves, forcing soldiers to cope with primal, instinctive fear during every waking moment. ...read more.

"We want to live at any price; so we cannot burden ourselves with feelings which ... would be out of place here" (Remarque 139) proclaims Paul. In other words, the emotional detachment that the soldiers made from feelings and emotions changed them from regular human being to feral, bloodthirsty animals, which would kill without blinking an eye in order to elude their demise. In summation, through the beast of emotional disentanglement, one can visualize the distraught soldiers affected by a lack of mental pleasure. In conclusion, one can facilely witness that the issues associated with the beast are omnipresent throughout the novel and that they each have their own beastly qualities. At the outset, the characters spread their base wishes upon others and cause affliction and devastation. Secondly, the impact of the warfare causes both physical and mental torture on the soldier involved in it and ultimately, emotional disconnection forces mercenaries to lose vision of the emotions and feelings they felt prior to the war. Through these beasts, the major themes and motifs of the novel can be lucidly conveyed and it would be impossible to omit them. When the guns cease their firing, and enemies are made friends, the dead will know peace, but the living will know pain. ...read more.