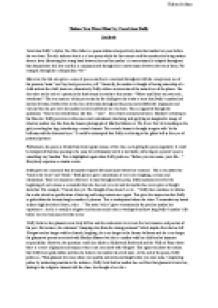 Analysis of 'Before You Were Mine'

﻿Robyn Ashton ?Before You Were Mine? by Carol Ann Duffy Analysis Carol Ann Duffy?s Before You Were Mine is a poem written retrospectively about her mother ten years before she was born. The title indicates that it is a love poem whilst the first stanza could be mistaken for being written about a lover illustrating the strong bond between her and her mother. A conversational is adopted throughout that demonstrates this love and this is communicated through false conversations between the two of them. For example, through the colloquialism ?eh?? Moreover, the title also gives a sense of possession that is consistent throughout with the conspicuous use of the pronoun ?mine? and ?my loud, possessive yell.? Generally, the mother is thought of having ownership of a child and not the child, however, alternatively Duffy utilises an inversion of the natural use of the phrase. ...read more.

This sexual element is brought in again with ?in the ballroom with the thousand eyes.? It could be interrupted that Duffy is referring to the glitter ball or the eyes of potential partners. Furthermore, the poem is divided into four regular stanzas of five lines each giving the poem regularity. It could be interpreted that time passing is the same for all humanity and it is inevitable; reflecting on a parent?s past is something very familiar. This is highlighted again when Duffy professes ?Before you were mine, your Ma?? Everybody experiences similar events. Duffy gives the consensus that her mother enjoyed life much more before her existence. This is elucidated by ?bend at the waist? and ?shriek.? Both phrases give connotations of excessive laughing, screams and exhilaration. ...read more.

For instance, the statement ?stamping stars from the wrong pavement? which implies that she has left Glasgow and no longer with her friends, laughing, she is no longer in the literary ballroom and she is no longer the glamorous person associated with Marilyn Monroe but she is a mother with her child and an immense responsibility. However, the quotation could also allude to Hollywood Boulevard and the Walk of Fame where there is a sense of glamour and romance that is not associated with Glasgow. This again elucidates the notion that Duffy feels guilt-ridden and that she believes her mother deserved more. At the end of the poem, Duffy professes, ?That glamour love lasts where you sparkle and waltz and laugh before you were mine,? employing pathos by awakening emotion in the audience; Duffy feels that her mother has sacrificed her glamour to have her, linking to the religious element with the shoes she thought of as relics. ...read more.