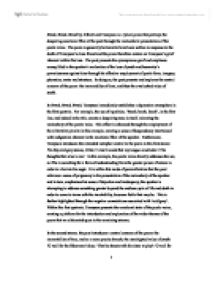 Break, Break, Break by Alfred Lord Tennyson is a lyrical poem that portrays the despairing emotional fibre of the poet through the melancholic presentation of the poetic voice. The poem is generally believed to have been written in response to the death of Tennyson's close friend and the poem therefore centers on Tennyson's grief inherent within this loss. The poet presents the synonymous grief and emptiness exemplified in the speaker's realisation of the loss of youth and humanity's powerlessness against time through his effective employment of poetic form, imagery, phonetics, metre and structure. In doing so, the poet presents and explores the central concern of the poem: the inexorability of time, and thus the overlooked value of youth. In Break, Break, Break, Tennyson immediately establishes a depressive atmosphere in the first quatrain. For example, the use of repetition, 'Break, break, break', in the first line, and indeed in the title, creates a despairing tone in itself, mirroring the melancholy of the poetic voice. This effect is enhanced through the employment of the alliterative plosive in this example, creating a sense of despondency intertwined with indignation inherent in the emotional fibre of the speaker. ...read more.

In the second stanza, the poet introduces a central concern of the poem: the inexorability of time, and as a more precise branch, the unmitigated value of youth: 'O well for the fisherman's boy, / That he shouts with his sister at play! / O well for the sailor lad, / That he sings in his boat on the bay!' In this example, the poet presents images of childhood euphoria, juxtaposed with the dejected tone of the first stanza. Through these joyous images, it could be argued that the poet creates a sense of nostalgia of a youth he himself has lost, and also the youth, and life, lost by the greater subject of the poem - of a biographical sense, Tennyson's friend - perhaps suggesting that the speaker realises how priceless youth is. Furthermore, it could be argued here that the poetic voice exhibits a degree of jealousy towards youth and the inexorability of it, portrayed through the use of exclamations and plosives. Tennyson carries this central idea into the third stanza through his extension of the sea metaphor with a view of relating it to the more malignant aspects of time: 'And the stately ...read more.

For example, the inclusion and repetition of 'Break, break, break' signals a circular structure to the poem, paralleling with that of life - life continues after the inevitability of death and loss. Although the poem may appear to be conclusive through this structure, the poetic voice is still portrayed in the dejected and melancholic sense he was initially presented in: 'Break, break, break, / At the foot of thy crags, O Sea! / But the tender grace of a day that is dead / Will never come back to me.' The stark juxtaposition between the might of the sea and the ineffectuality of the speaker is employed to enhance the reader's awareness of the power nature holds over humanity, and in more specifically relation to the poem, the control time has over humanity. In conclusion, in the lyrical poem Break, Break, Break, Tennyson creates a dejected and melancholic representation of the poetic voice in order to portray the central themes of the inexorability of time and in turn, the value of youth. Through the effective employment of poetic form, imagery, phonetics, metre and structure the poet effectively creates this representation of the speaker and therefore successfully augments the reader's awareness of this central concern of the poem. Word count: 972 3 ...read more.