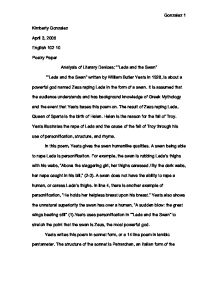 Kimberly Gonzalez April 3, 2006 English 102 10 Poetry Paper Analysis of Literary Devices: ""Leda and the Swan" ""Leda and the Swan" written by William Butler Yeats in 1928, is about a powerful god named Zeus raping Leda in the form of a swan. It is assumed that the audience understands and has background knowledge of Greek Mythology and the event that Yeats bases this poem on. The result of Zeus raping Leda, Queen of Sparta is the birth of Helen. Helen is the reason for the fall of Troy. Yeats illustrates the rape of Leda and the cause of the fall of Troy through his use of personification, structure, and rhyme. ...read more.

The structure of the sonnet is Petrarchan, an Italian form of the sonnet that characteristically divides its theme into an octave and sestet. The octave is eight lines and states the problem. The sestet is six lines and states the resolution of the problem. In this poem, there is a clear separation between the octave and sestet. In the octave of the poem or first eight lines, Yeats illustrates Leda being raped which as represents the problem. The last six lines of the poem or the sestet Yeats resolves the problem. A shudder in the loins engenders there The broken wall, the burning roof and tower And Agamemnon dead. Being so caught up, So mastered by the brute blood of the air, Did she put on his knowledge with his power Before the in different beak could let her drop? ...read more.

How can those terrified vague fingers push The feathered glory from her loosening thighs? And how can body, laid in that white rush, But feel the strange heart beating where it lies? (5-8) Yeats uses these three elements in ""Leda and the Swan", to build his poem. Personification is used to give the swan the ability to use humanlike characteristics to rape Leda and to show the power that Zeus has. The structure helps to separate the problem and the resolution, making it easier for the reader to better understand the poem. The rhyme scheme is used to help with the flow of the poem; it sounds better reading it out loud with alternate rhyme. Yeats uses personification, structure, and rhyme to show the raping of Leda by Zeus, the swan and the consequences that come about in the future. ...read more.