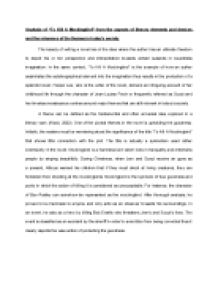 ﻿Analysis of ?To Kill A Mockingbird? from the aspects of literary elements and devices and the relevance of the themes in today?s society The beauty of writing a novel lies in the idea where the author has an ultimate freedom to depict his or her perspective and interpretation towards certain subjects in boundless imagination. In the same context, ?To Kill A Mockingbird? is the example of how an author assimilates the autobiographical element into the imagination thus results in the production of a splendid novel. Harper Lee, who is the writer of the novel, delivers an intriguing account of her childhood life through the character of Jean Louise Finch or frequently referred as Scout and her timeless masterpiece centres around major themes that are still relevant in today?s society. A theme can be defined as the fundamental and often universal idea explored in a literary work (Ward, 2002). One of the pivotal themes in the novel is upholding the goodness. Initially, the readers must be wondering about the significance of the title ?To Kill A Mockingbird? that shows little connection with the plot. ...read more.

The repetition of word ?n****r? which is offensive for the black is noticeable as an effort to accentuate the sense of racial prejudice in the novel. The climax in To Kill A Mockingbird is the event in which Tom Robinson who is a black is sentenced to death for the accusation of beating and r****g Mayella Ewell who is a white. Lee deliberately chooses that event to emphasise on the issue of r****m as Tom Robinson is clearly innocent and he is convicted just because he is a black. Another example of symbolism is shown by Lee in her novel through Tom?s characteristics of being innocent, gentle and harmless that symbolises a mockingbird. In a different aspect, Tom parallels the mockingbirds that Atticus mentioned to his children which is another literary device used in the story. In today?s context, although Barrack Obama has been appointed to be the first African American president of America, research shown that r****m towards black people is still occurring (Revolution, n.d.). One of the testaments is from the angle of employment. In the United States, employers prefer to take a white people with a criminal record rather than a black who is clean. ...read more.

In today?s context, bravery is vital in order to face vicious challenge in life. As a matter of fact, in order to do good deeds, bravery is also needed. Specifically, the bravery of the volunteer team of Malaysia that was sent to a conflict zone in Palestine is extraordinary. It was estimated that 5300 Palestinians have been injured, including at least 1855 children and 795 women resulted from the catastrophic war between Palestine and Israel (Malaysian Medical Relief Society, 2009). Four teams which comprised mainly of logistics personnel and medical specialists were formed by the Malaysian Medical Relief Society (MERCY) to provide the population in Gaza affected by Isrealis attack with humanitarian support. The volunteers serve bravely in the name of humanity although they were aware of the collateral damage in the conflict in which their lives were put at stake. In a nutshell, To Kill A Mockingbird is a novel in which the author beautifully blends the literary elements and devices with an appealing storyline and the major themes are gloriously highlighted to the extent of delivering a positive impacts towards the readers. As Herman Melville stated, ?To produce a mighty book, you must choose a mighty theme. No great and enduring volume can ever be written on the flea, though many there be that have tried it.? ...read more.