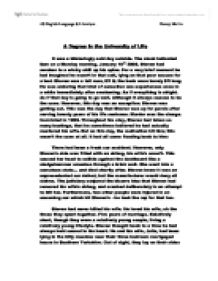 A Degree in the University of Life It was a blisteringly cold day outside. The clock indicated 8am on a Monday morning. January 18th 2006. Steven had awoken to a wintry chill up his spine. For a very brief moment he had imagined he wasn't in that cell, lying on that poor excuse for a bed. Steven was a tall man, 6ft 5; the beds were barely 6ft long. He was enduring that kind of sensation one experiences once in a while immediately after awakening. As if everything is alright. As if that day is going to go well. Although it always ceases to be the case. However, this day was an exception. Steven was getting out. This was the day that Steven was up for parole after serving twenty years of his life sentence. Murder was the charge. Convicted in 1986. Throughout his stay, Steven had taken so many beatings, that he sometimes believed he had actually murdered his wife. But on this day, the realization hit him; this wasn't the case at all. It had all come flooding back to him: There had been a freak car accident. However, only Steven's side was fitted with an airbag, his wife's wasn't. ...read more.

"Yes," Steven replied. That false admission saw a sharp pain fly through Steven's heart. Like a jagged knife had been forced through it, and then rotated to create a wound incapable of closing. The woman stared him straight in the eyes for a few seconds, and then stamped his parole form. Steven caught a hasty glimpse as the woman rose from her seat. It read 'approved' in bright green ink! She handed it to the warden who told Steven to stand and leave the room. Steven sat there, incredulous for a moment or two, for it hadn't quite set in. He was a free man! He strolled back to his cell with a swagger. The taunting remarks seemed inaudible. Steven was on cloud nine as he packed his only provided suitcase with the tarnished possessions he had. A single prison guard walked him to the front entrance of the prison and opened the gate. Steven stepped outside the gate and fell to the ground in elation. He had been gifted a second chance at life. Before his spell in prison, Steven was a biology teacher at a school in Doncaster. He attained a 2:1 degree at Oxford University and considered himself an intelligent man. ...read more.

"Five pounds, mate." he said. Steven handed over the five pounds and sat back down. He bought the man a drink and they sat there until closing time, Steven was telling the man his story, and he seemed unreservedly engrossed. Closing time arrived at 11:30pm and Steven departed. He found himself walking back through the town centre with just a worthless baseball bat. He couldn't even answer himself as to why he bought it. He'd acquired it almost absentmindedly. He saw the local police station at the end of the road. He walked in. He walked, feeling disconcerted, up to the desk sergeant who enquired, "Can I help you, sir?" Then, with a swift, sharp swing of the baseball bat, the desk sergeant was on the floor, unconscious. Steven began laying into him with the bat almost obliviously until another police officer pulled Steven off of the sergeant, and threw him up against the wall. The sergeant was dead. Brutal head injuries meant even intensive care could not salvage his life. Steven was convicted guilty of murdering a police officer on April 15th 2006. "Sentenced to life with no chance of parole!" the judge exclaimed. As he stepped back into his cell, he lied on his bed with an indeterminate smile. One thing was assured. He was home. ?? ?? ?? ?? AS English Language & Literature Kenny Martin ...read more.