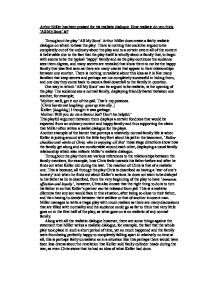 Arthur Miller has been praised for his realistic dialogue. How realistic do you think All My Sons(TM) is?

Arthur Miller has been praised for his realistic dialogue. How realistic do you think 'All My Sons' is? Throughout the play 'All My Sons' Arthur Miller does create a fairly realistic dialogue on which to base the play. There is nothing that could be argued to be completely out of the ordinary about the play and to a certain extent all of the content is believable due to the fact that the play itself is wholly about a family that, to begin with seems to be the typical 'happy' family and as the play continues the audience sees them digress, and many secrets are revealed that show them to not be the happy family that was first seen as there are many cracks that appear in their relationships between one another. There is nothing unrealistic about this idea as it is like many families that keep secrets and perhaps are not completely successful in hiding them, and one day they come back to cause a fatal downfall to the family in question. ...read more.

Throughout the play there are various references to the relationships between the family members, for example, how Chris feels towards his father before and after he finds out what Keller did during the war. The reaction of Chris is that of a realistic one. This is because, all through the play Chris is described as having a 'star of one's honesty' and when he finds out about Keller's actions he does not want to be disloyal to his father as he is described, from the very beginning of the play to have 'immense affection and loyalty', however, Chris also knows that the right thing to do is to turn his father in so that Keller's partner can be released from jail. This is a realistic dilemma that any son would face in this situation, after being so close to their father, and then having to decide between their welfare or that of another innocent man. ...read more.

This could be taken as a fairly melodramatic thing to say, Chris knew that Keller had a business and needed to work and produce to get money for his family, and for Chris to say this to him, could be taken as perhaps a fairly childish thing to say. Another perhaps unrealistic idea within the play is the suicide that occurs, Larry, Keller and the possibility that perhaps Chris may also want to kill himself, the is suggested when he goes out for a drive and does not return for a while and his mother begins to worry. This all seems very dramatic as even in the situation, suicide seems perhaps slightly over the top, thus causing it to be slightly unrealistic. In conclusion, although there are a few over dramatic and slightly unrealistic things about the dialogue in 'All My Sons' Arthur Miller does manage to produce a relatively realistic play as there are only small amounts that could be criticised to be unlikely and therefore, to state that, 'Arthur Miller has been praised for his realistic dialogue' would be a correct admiration to make. ...read more.