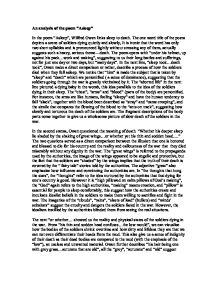 An analysis of the poem "Asleep" In the poem "Asleep", Wilfred Owen links sleep to death. The one word title of the poem depicts a scene of soldiers dying quietly and slowly, It is ironic that the word has only two short syllables and is pronounced lightly without stressing any of them, actually suggests such a heavy, serious theme-death. The poem opens with "under his helmet, up against his pack...work and waking", suggesting to us their long battles and sufferings, not for just one day or two days, but "many days". In the next line, "sleep took...death took", Owen make a direct comparison or rather, describe a process of how the soldiers died when they fell asleep. We notice that "him" is made the subject that is taken by "sleep" and "death" which are personified ( a sense of dominance), suggesting that the soldiers going through the war is greatly victimized by it. The "aborted life" in the next line pictured a dying baby in the womb, this idea parallels to the idea of the soldiers dying in their sleep. ...read more.

The imageries of the "clouds", "rains", "sleets of lead" (bullets) and "winds' scimitars" suggest the cruelty and dangers the soldiers faced in the war. However, the idealism instilled by the authorities blinded them from seeing the real situations. The next "or whether... showed us the reality and physical states of the soldiers dying in the war. From "his thin and sodden head confuses...the low mould", we can visualise how the bodies of the soldiers shrink overtime and how dirty and lifeless they are that we can not even differentiate their heads from the mud. This also give us a sense of indignity of their death as their dead bodies are compared to the mud (with the emphasis of the "low"), an useless and unwanted material. Owen further describes "his hair being one with grey grass...autumns that are old", all the "grey", "autumns" and "old" suggest aging, and shows how the soldiers senesced prematurely in the war. Again, Owen employs a metaphor to compare their hair to the "grass" and "finished fields", suggesting their insignificance and commonness of the dying soldiers, and also provide us with an unsightly scene of corpses lying all over on the battle fields. ...read more.

Furthermore, the rhyme contributes to the dark mood as well.In the first part of the poem, we notice that Owen uses mainly the consonance of "p" and "k", as in the rhyme of words like "pack" and" back", "waking" and "quaking", "sleeping" and "leaping". These two consonance first give rise a heavy tone to the poem, the "k" sounds relatively heavier than the "p", which parallels to the idea of "death" being a "deeper sleep". The heavy sounds also contribute to the fighting mood of the war which is still going on. In the later part of the poem, however, the consonance "o" and "u" occurs more frequently. ("low mould", "autume..old") As we can see from the "finished fields" which implies the war has over, it is possible to say that Owen uses these gloomy and mournfully sounded consonance to suggest the sorrow and the degradation of the soldiers through the war. The "a" and "e" consonance employed in the last few lines, coupled with the meaning of the words (that has been discussed earlier on) suggests a sense of acknowledgement and bitter acceptance of the soldiers' lives. ...read more.