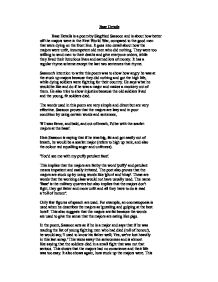 Base Details is a poem by Siegfried Sassoon and is about how betteroff the majors were in the First World War, compared to the good men

Base Details Base Details is a poem by Siegfried Sassoon and is about how better off the majors were in the First World War, compared to the good men that were dying on the front line. It goes into detail about how the majors were unfit, incompetent old men who did nothing. They were too willing to send men to their deaths and give everyone orders, while they lived their luxurious lives and earned lots of money. It has a regular rhyme scheme except the last two sentences that rhyme. Sassoon's intention to write this poem was to show how angry he was at the stuck up majors because they did nothing and got the high life, while dying soldiers were fighting for their country. ...read more.

'I'd toddle safely home and die- in bed. Toddle is an excellent word because it shows that the majors are old and unfit - again. Also, the word 'safely' makes the reader feel anger because the soldiers were not this when they were sent to war. When it mentions 'die in bed', it gives us an image of the majors dying old in the comfort of their own home and this is wrong because many young soldiers died away from home, fighting for their country. The feeling of this poem is very sarcastic and bitter. You can see that the poet is very angry at the majors who prolonged the war for their benefit so they could get richer. I loved the way Sassoon saidthat if he was a major then he would be unfit and do nothing, etc. The poet makes the anger come through. It makes the reader (including myself) feel great anger towards the majors. ...read more.