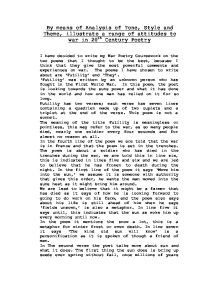 By means of Analysis of Tone, Style and Theme, illustrate a range of attitudes to war in 20th Century Poetry

By means of Analysis of Tone, Style and Theme, illustrate a range of attitudes to war in 20th Century Poetry I have decided to write my War Poetry Coursework on the two poems that I thought to be the best, because I think that they give the most powerful comments and experiences on war. The poems I have chosen to write about are 'Futility' and 'They'. 'Futility' was written by an unknown person who has fought in the First World War. In this poem, the poet is looking towards the suns power and what it has done in the world and how one man has relied on it for so long. Futility has two verses; each verse has seven lines containing a quadrien made up of two cuplets and a triplet at the end of the verse. This poem is not a sonnet. The meaning of the title Futility is meaningless or pointless, this may refer to the war, as so many people died, nearly one soldier every four seconds and for almost no reason at all. ...read more.

In the poem it mentions the snow a lot, this is a metaphor for winter frost or even death. In line seven it says 'The kind old sun will know' is a personification as it is spoken of though a friend of man. In The second verse the poet talks more about sun and what it does. The first thing the sun does is bring up seeds ever spring without fail, once millions of years ago it created life on earth, it refers to this in line twelve, this is an allusion, it is a reference to5the bible, Genesis CH 2 verse 7 is an example of an allusion. Also in line twelve the poet also asks a rhetorical question ' Was it for this the clay grew tall,' the meaning of this is that was man created only to die. In line thirteen the poet also says what as the point in the creation of life on earth if it ends in death. ...read more.

Death is an example of a personification in the poem. The Bishop could be saying this as it is before the war has begun and is giving the soldiers a pep talk, to get them synced up and give them a bit of encouragement. It could also be that the soldiers are at the front and trying to give them encouragement. The soldiers reply to what the Bishop says by saying 'We're none of us the same!' 'For George lost both his legs; and Bills stone blind; Poor Jim's shot through the lungs and like to die; And Bert 's gone syphilitic:' and they also say not one person hasn't seen a difference, the soldiers are implying that they did not expect this kind of change to there lives, they though it would be spiritually or something like that. The Bishop replies that 'The ways of God are strange,' this is a general statement that does not address the problem but contains universal truth. The Bishops words are truer than he realised, but there truth is not what he meant at all. ...read more.