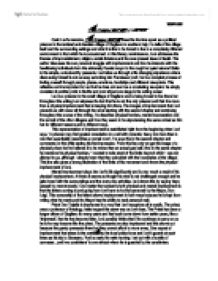 Carlo Levi's memoirs, 'Christ Stopped At Eboli', describe his time spent as a political prisoner in the isolated and desolate

Christ Stopped At Eboli by Carlo Levi Carlo Levi's memoirs, Christ Stopped At Eboli, describe his time spent as a political prisoner in the isolated and desolate village of Gagliano in southern Italy. He tells of the village itself and the surrounding settings and what it is like to be forced to live in a completely different environment to that which he is accustomed. In this literary reminiscence, Levi addresses the themes of impoverishment, religion, social divisions and the ever-present issue of death. The author discusses his own personal struggle with imprisonment and how he interacts with the bewildering individuals from the extremely Fascist mayor to the rough but quiet natured Giulia to the simple, untrustworthy peasants. Levi takes us through a life changing experience where discovering himself is not as easy as looking into 'Narcissus' pool', but is a complex process of finding oneself through people, places, emotions, hardships and different viewpoints. This reflective work is important to Levi but he does not see it as a concluding viewpoint, he simply considers it another point in his life and over all just one stage in his writing career. ...read more.

Also in the same chapter he mentions his physical borders. 'I wanted to take stock of the limits beyond which I was not allowed to go, although I already knew that they coincided with the boundaries of the village'. This line also gives a strong illustration of the limits of his movement and shows the physical imprisonment of Levi. Mental imprisonment plays into Levi's life significantly and is very much a result of his physical imprisonment. At times it seems as though his mind is not challenged enough and he gets bored with the surroundings and the every day activities. Levi shows this by saying 'days passed by monotonously'. One matter that concerns both physical and mental imprisonment is that the letters coming to and going from Levi have to be first censored by the Mayor, Don Luigi. This censorship of the letters shows imprisonment in both ways because he is kept from writing what he wants and the Mayor has the ability to read personal mail. Priest Don Trajella is imprisoned in a way that Levi recognizes all to easily. ...read more.

The image of imprisonment that is portrayed by the author in this work is an extremely significant picture and Levi makes a point of mentioning it. A Jew himself in the time of Hitler, Carlo Levi knew what it was like to be persecuted and this is turn helps him to relate to the peasants understand the Priest because he to is imprisoned. It is not onlt the characters and physical and mental characteristics that paint the image of imprisonment but also the setting. Set in the mountainous region of Lucania, the mountains are a prison within themselves. This image of imprisonment is easily noticed because it is so well placed and described and this may stem from the fact that Levi was an artist. Overall the image comes through strongly and in many cases and Levi uses many different techniques to convey this topic to the reader clearly. Christ Stopped at Eboli is perhaps one of the great books of our century. Its effective, convincing humanism seeks to breed understanding and widen mental horizons. Half-anthropology and half-literature, it's also a book that any travel writer would give up their life to have written. A review by RL, a creditable review site. Word Count: 955 ?? ?? ?? ?? Joel Wake ...read more.