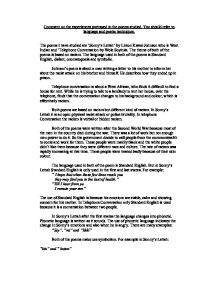 Comment on the experiences portrayed in the poems studied. You should refer to language and poetic t

Comment on the experiences portrayed in the poems studied. You should refer to language and poetic techniques. The poems I have studied are 'Sonny's Lettah' by Linton Kwesi Johnson who is West Indian and 'Telephone Conversation by Wole Soyinka. The theme of both of the poems is based on r****m. The language used in both of the poems is Standard English, dialect, onomatopoeia and symbolic. Johnson's poem is about a man writing a letter to his mother to inform her about the r****t attack on his brother and himself. He describes how they ended up in prison. Telephone conversation is about a West African, who finds it difficult to find a house for rent. While he is trying to talk to a landlady to rent her house, over the telephone, finds that the conversation changes to his background and colour, which is effectively r****m. Both poems are based on r****m but different kind of r****m. In Sonny's Lettah it is an open physical r****t attack or police brutality. In telephone Conversation the r****m is verbal or hidden r****m. ...read more.

The use of phonetic language indicates the change in Sonny's emotions and also when he is angry. There are many examples: "Sey", "mi" and "likkl" Both of the poems make use symbolism. For example in Sonny's Lettah: "bin" and " baton" "Bin" symbolises the waste of human life and "baton" symbolizes that the police was carrying the batons in their hands instead of around their waist in the baton holder and so was ready for violence. In Telephone Conversation there is a great use of symbolic language. For example: "lipstick coated" and "long gold-rolled" These terms indicate that the lady is rich. Red booth, red-box and red double-tiered, symbolise danger of r****m. It also symbolises that the person is different from others, and is treated as an alien from out of space. Both of the poems make use of rhythm. In Sonny's Lettah the rhythm is slower at the start and speeds up in the middle and slows down again at the end. The rhythm gets faster as the fight between the police and the man starts. ...read more.

The form of both of the poems is different from each other. Sonny's Lettah is written in a form of a letter because it is a letter from a son to a mother. Telephone Conversation is written in the form of telephone conversation. r****m creates violence, destroys life on both sides, not only the victim but the suspect too. In Sonny's Lettah the lives are destroyed. The policeman suspected of r****t attack, Sonny the victim says: "an crash an dead" and "charge mi fi murder" The example "an crash an dead" shows that the suspect who created the fight died and he probably had wife and children and they will now have no man to bring the money in the house and protect them. Both of the poems used symbolic and standard language, rhythm and repetition. Also the theme for both of the poems is the same which is r****m. One is physical and the other one is verbal r****m. I prefer poem number one, which is Sonny's Lettah because the various techniques used by the writer, for example: onomatopoeia, repetition and rhythm. I like this poem because the way the writer shows rhythm of the fight. Also the language makes it more interesting and challenging to understand it. ...read more.