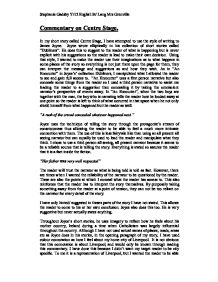 Commentary on Centre Stage. In my short story called Centre Stage, I have attempted to use the style of writing to James Joyce. Joyce wrote elliptically in his collection of short stories called "Dubliners". He does this to suggest to the reader of what is happening but is never explicit with his suggestions so the reader is lead to make their own decision. Using that style, I wanted to make the reader use their imaginations as to what happens in some places of the story so everything is not just there upon the page for them, they can interpret the message and suggestions as and how they wish. As in "An Encounter" in Joyce's' collection Dubliners, I manipulated what I allowed the reader to see and gain full access to. "An Encounter" uses a first person narrative but also conceals some things from the reader so I used a third person narrative to assist me leading the reader to a suggestion then concealing it by taking the omniscient narrator's perspective of events away. In "An Encounter", when the two boys are together with the man, the boy who is narrating tells the reader how he looked away at one point so the reader is left to think of what occurred in that space when he not only shield himself from what happened but the reader as well. ...read more.

It is not obvious that this connotation is about Liverpool, and would only be known through reading this commentary. I have done this because I didn't want my target reader to be city specific. To me it is a representation of Liverpool, but I wanted the reader to be able to make of the connotation what they will and make their own connection with the story. "Trimmings of gold and filled with deep rouge" The colour red for me is the signature colour of Liverpool because of one of its world famous football teams I feel Liverpool is quite a theatrical city so a lot of the red connotation is theatrical aspects. I have a keen interest in theatre so I wanted to incorporate this into the story. I have mentioned no time period in this story but the whole way through I tried to use language that could set the story in the modern day or sometime in the past. I tried to use names that would be from a similar time period to when Joyce sets his stories and also some other things like the mention of gambling and earnings. "He would take his weekly earnings and place numerous bets" I think through doing this it would appeal more to a reader as again they are left to their own devices to think about the time. ...read more.

Joyce uses religious connotations throughout his stories such as the characters of the priests, which feature in his stories. At the end of the story, there is a twist. I made the twist so the reader is not aware whether the character is performing with the gun or if she's not, whom she shoots. The reader doesn't know whose hand has fallen with the curtain or whether it's purely someone who dies in the performance. "Red was soaked up by the deep rouge of the royal curtains" The reader has to decide for themselves if this is blood, or the light from the red hue is dimming. Also it could be taken as a connotation for the emotion that the audience would have felt when watching the performance. Usually when an audience is engrossed in a tense play the temperature rises and is common with the whole audience so the red could also be symbolic of that heat. Throughout this story, I have attempted to write elliptically in the style of Joyce. I have deliberately left the ending open to the reader as Joyce does so they are forced to ponder the outcome that could be argued any way. Stephanie Gadsby Yr12 English lit/ Lang Mrs Grenville ...read more.