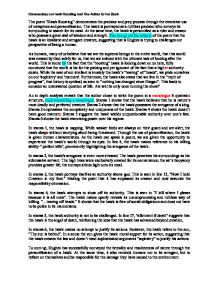 Commentary On Hawk Roosting and The Author to Her Book

The poem "Hawk Roosting" demonstrates the predator and prey process through the extensive use of metaphors and personification. The hawk is portrayed as a ruthless predator who surveys its surrounding in search for its meal. At the same time, the hawk is personified as a ruler and creator who possess a great deal of wisdom [W1]and strength. This brings out the subject of the poem that the hawk is an idealistic [W2]and arrogant creature, suggesting that is Hughes is trying to challenges our perspective of being a human. As humans, many of us believe that we are the supreme beings in the entire world, that this world was created by God solely for us, that we are imbued with the ultimate task of looking after the world. This is ironic by the fact that the "roosting" hawk is looking down on us here, fully convinced that the world is his for the picking and yet ignorant of the fact that a higher authority exists. While the seat of our intellect is innately the hawk's "tearing" of "heads", we pride ourselves on our 'sophistry' and 'manners'[W3]. Furthermore, the hawk also states that we live in the "myth of progress", that history is cyclical, as seen in "nothing has changed since I began[W4]". ...read more.

In line 17, "allotment if death" suggests that the hawk is the angel of death, reinforcing the idea that the hawk has advanced beyond creation, In stanza 6, the hawk makes no attempt to justify its actions. However, the hawk refers to the sun, "The sun is behind". In a sense the sun gives the hawk moral support for its action, suggesting that the hawk creates the law and doesn't need sophisticated arguments "sophistry" to justify his actions. [W13]To sum up, Hughes has successfully conveyed the brutality and resoluteness of nature through the personification of a hawk. At the same time, it also reminds humans not to be arrogant, but to reflect on themselves and be responsible for the damage they have caused to the environment. Throughout the poem "The author to her book", the metaphor of control is the image of the baby being born and nurtured. This imagery conveys the complicated attitude of the speaker through the impression that the speaker has low regard for her own work. Despite being having deep affection for her creation, she still recognized the importance of "send thee out of door". This decision is mixed with the feeling that sending her creation out of the door could be" "less wise than true", which could change her creation for worse. ...read more.

This also shows why her decision to have her book "exposed to public view" opposes her shame toward the work. Sending out her work because it was scribbled with imperfection at the price of lessening its errors, so that it will avoid criticism. Although the book was perfected, it got better with the aid of the author's "friends." The baby she gave birth to has finally grown up and become a story to be shared in books. A reasonable attempt at this stage Jensen. More use of quotations and developed discussion will help you obtain a better mark next time. A 3 B 2 C 2 = 13 D 3 E 3 [W1]Not sure about the hawk being 'wise' [W2]Make sure you understand what words mean - 'idealistic' means na�ve or optimistic or even romantic - hardly a word you would use when discussing our hawk. [W3]Not sure what you mean here [W4]Ambiguous - if history is cyclical then how can 'nothing' change? Irony... [W5]Remember you are writing a commentary, simply literary analysis - try not to get side-tracked with tok issues! [W6]delete [W7]the fate of his prey - not 'one's' which implies 'us' [W8]you must supply a quotation here [W9]is delivering a monologue [W10]quotation [W11]you must use quotations [W12]You should develop discussion of his observable world [W13]Good analysis ?? ?? ?? ?? Commentary on Hawk Roosting and The Author to Her Book ...read more.