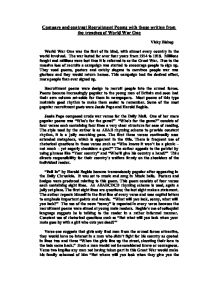 Compare and contrast Recruitment Poems with those written from the trenches of World War One Vicky Bishop World War One was the first of its kind, with almost every country in the world involved. The war lasted for over four years from 1914 to 1918. Millions fought and millions were lost thus it is referred to as the Great War. Due to the massive loss of recruits a campaign was started to encourage people to sign up. They used poems, posters and catchy slogans to convince people war was glorious and they would return heroes. This campaign had the desired effect, more people than ever signed up. Recruitment poems were design to recruit people into the armed forces. Poems became increasingly popular to the young men of Britain and soon had their own column set-aside for them in newspapers. Most poems of this type maintain good rhythm to make them easier to remember. Some of the most popular recruitment poets were Jessie Pope and Harold Begbie. Jessie Pope composed crude war verses for the Daily Mail. One of her more popular poems was "Who's for the game?" "Who's for the game?" consists of four verses each containing four lines a very clear structure for ease of reading. ...read more.

They despised recruitment poets seeing them as watching the war from the safety of their homes, not knowing what it was really like to be in war. Trench poems were often written in hospitals as the poet was recovering from the emotional trauma he had suffered in the field. Two popular trench poets were Seifried Sassoon and Wilfried Owen. Wilfred Owen wrote some of his poems at Craiglockhart war hospital, which specialised in emotional and mental trauma. Owen was suffering from shell shock, and so was another famous trench poet Seifried Sassoon. Sassoon encouraged and improved Owens work helping him to produce his war experience poems. Siefried Sassoon wrote "Suicide in the trenches", a poem about a young boy soldier who committed suicide because of the conditions in the trenches were appalling. They were wet, muddy and disease was rampant. "Suicide in the trenches" consists of three verses each having four lines. Between the second and third verses a pause is required by the author to allow the reader time for reflection and to add to the effectiveness of the poem. Sassoon uses alliteration such as "Simple soldier" and an AABB rhyming scheme. In the first verse this poem paints a picture of the young carefree boy before he goes to war "Who grinned at life in empty joy". ...read more.

He was used to getting a knock or two on the football field. He joined up after he'd been drinking "When he'd drunk a peg he thought he'd better join." He believed he'd look dashing in uniform and the girls would find him irresistible, a hero, "Please the giddy jilts" "And soon he was drafted out with drums and cheers." He was under age, no one questioned him when he said he was nineteen, they didn't care as long as he signed up. "Smiling they wrote his lie; aged nineteen years". Verse five recollects how differently people reacted to him often wounding "Some cheered him home but not as crowds cheer Goal." In verse six he thinks about his future. He will never be independent he will always need someone to take care of him. "Now he will spend a few sick years in institutes", "And take whatever pity they dole." He waits for death, it's all he has to look forward to. "How late it is! Why don't they come and put him into bed? Why don't they come?". Overall I think the recruitment poems and poets fulfilled their aim in getting men to sign up. Their message was put across successfully though I think it is thanks to poets like Siefried Sassoon and Wilfred Owen that people understood the truth about World War 1 and the horrors it brought. ...read more.