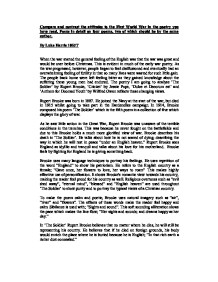 Compare and contrast the attitudes to the First World War in the poetry you have read. Focus in detail on four poems, two of which should be by the same author.

Compare and contrast the attitudes to the First World War in the poetry you have read. Focus in detail on four poems, two of which should be by the same author. By Luke Harris 10R/T When the war started the general feeling of the English was that the war was great and would be over before Christmas. This is evident in much of the early war poetry. As the war progressed, however, people began to feel disillusioned and eventually had an overwhelming feeling of futility in that so many lives were wasted for such little gain. The people back home were left feeling bitter as they gained knowledge about the suffering these young men had endured. The poetry I am going to analyse 'The Soldier' by Rupert Brooke, 'Cricket' by Jessie Pope, 'Dulce et Decorum est' and 'Anthem for Doomed Youth' by Wilfred Owen reflects these changing views. Rupert Brooke was born in 1887. He joined the Navy at the start of the war, but died in 1915 whilst going to take part in the Dardenelles campaign. In 1914, Brooke composed his poem 'The Soldier' which is the fifth poem in a collection of five which displays the glory of war. As he saw little action in the Great War, Rupert Brooke was unaware of the terrible conditions in the trenches. This was because he never fought on the battlefields and due to this Brooke holds a much more glorified view of war. ...read more.

Originally, Wilfred Owen had dedicated this poem to Jessie Pope as she was very pro-war, but Siegfried Sassoon urged him not to. This, however, was not the case for many of the soldiers who signed up as they believed they were doing 'their bit' for their country and were swept up in the propaganda. This poem could have been written about many battles, but is more probably about 1916, when gas attacks were first tried and tested against the English. I think this poem is about the Battle of Marne. In the first section of the poem, Wilfred Owen describes the soldiers at the front line as "Old beggars". He is telling us that these men are so tired that they do not know what they are doing. They march on, because they are told to. Wilfred Owen describes these men as "Drunk with Fatigue". The first and second stanzas are relatively long, and then there is a short, sharp dramatic sentence, followed by another long paragraph. The short paragraph in the middle really stands out to the reader: "In all my dreams before my helpless sight, He plunges at me, guttering, choking, drowning." Because of the powerful, emotive language used, and the fact that it is isolated from the rest of the poem, this sentence grabs the attention of the reader. I think the layout of "Dulce et Decorum est" is purposefully set out as it represents the struggle that the soldier has to face. The first two paragraphs are of similar length, and represent the organised troops going off to war. ...read more.

When people were killed at war, or died for any other reason, the families of the dead would draw down their blinds and shut their curtains as a mark of respect enabling them to mourn in private and also let other people know that there had been a death in the family. However, because death was so common during WWI, blinds would be drawn every day. However, it is important to remember that soldiers only spent 3-4 days a month on average in the front lines and although massive casualties ensued, some did return from the Front. 'Anthem for Doomed Youth' asks a question at the beginning of each stanza, which it then answers through the rest of that stanza. Owen does this to approach a poem from a different prospective. By asking a question, he gets the reader thinking before answering himself. It causes tension and sadness because the answer to the questions we probably could answer but do not because it is upsetting to remember the dead - especially when the question implies why should it have been them and not you? These four poems show how attitudes to war radically changed as the war progressed. In 'The Soldier', Brooke is very patriotic and extremely pro-war. 'Cricket' shows us that in 1915 a feeling of pro-war was still there but disillusionment had started to creep in. The two poems by Wilfred Owen bring home the harsh realities of war and ask the reader, safe at home, to feel pity for the soldiers on the front line. They portray a bitter attitude and strong feelings of anger and resentment. By Luke Harris 10R/T ...read more.