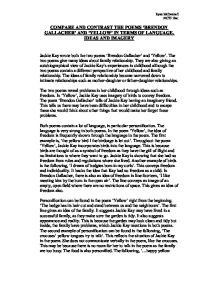 Compare and contrast the poems 'Brendon Gallacher' and 'Yellow' in terms of language, ideas and imagery.

COMPARE AND CONTRAST THE POEMS 'BRENDON GALLACHER' AND 'YELLOW' IN TERMS OF LANGUAGE, IDEAS AND IMAGERY Jackie Kay wrote both the two poems 'Brendon Gallacher' and 'Yellow'. The two poems give many ideas about family relationship. They are also giving an autobiographical view of Jackie Kay's experiences in childhood although the two poems contain a different perspective of her childhood and family relationship. The ideas of family relationship become narrowed down to intimate relationships such as mother-daughter or father-daughter relationships. The two poems reveal problems in her childhood through ideas such as freedom. In 'Yellow', Jackie Kay uses imagery of birds to convey freedom. The poem 'Brendon Gallacher' tells of Jackie Kay having an imaginary friend. This tells us there may have been difficulties in her childhood and to escape these she would think about other things that would make her forget these problems. Both poems contain a lot of language, in particular personification. The language is very strong in both poems. In the poem 'Yellow', the idea of freedom is frequently shown through the language in the poem. The first example is, 'the yellow bird I the birdcage is let out'. Throughout the poem 'Yellow', Jackie Kay incorporates birds into the language. ...read more.

It seems that she is 'old-fashioned'. In 'Yellow', an example can be found in the following, '...eat what she calls a plate...'. In this poem, Jackie Kay makes the generation gap between herself and her mother quite clear. This again gives an idea of relationship and shows us that the mother-daughter relationship of Jackie Kay was not happy. In 'Brendon Gallacher', Jackie Kay continues the image of the mother, 'There have never been any Gallachers next door'. The mother does not understand about the imaginary friend. This backs the suggestion that Jackie Kay's adoptive mother was not suited to understanding and loving a child and Jackie Kay may have had a rough childhood. The poem 'Yellow' also suggests no notice is taken of her hard work for the family. '...and weeps into it before drying the dishes...'. As the poem seems so lively, the verb 'weeping' seems quite out of the blue. It makes us feel sympathy for the mother by linking the two actions washing dishes and weeping, suggesting the weeping is common and no one takes notice of her anymore. Each poem has a different tense. 'Yellow' is set in the present tense. This is effective in giving immediacy of the moment although it is the past of Jackie Kay's life and she is reliving the moment in the poem. ...read more.

The mother might have then been able to change Brendon Gallacher to a kind, loved person. This way she would have looked good in the public eye. Jackie Kay's experiences as a child were not particularly pleasant when the relatives visited. In the poem 'Yellow', Aunt Peggy visits. She seems quite a strict character. Her speech is written in italics, alike the father's speech. This gives a better idea of how loud Aunt Peggy may be talking to Jackie Kay. Aunt Peggy 'shoves' Jackie Kay's head into the yellow egg yolk. This shows that Aunt Peggy may be quite nasty and violent, giving the reason why Jackie Kay might dislike her. Jackie Kay finds comfort by personifying the food. The 'passionate beetroot b***s', rolling across the plate conveys an image of close, intimate relationship. The colour of the beetroot b***s, red, is also related to love and affection. Jackie Kay did not appear to get any of this in the poem. Throughout both poems, Jackie Kay cleverly revealed her childhood and her family relationship with the other members of her adoptive family through the language of each poem. Everything seems to be linked to family relationship in some way, in particular the relationship between a mother and daughter. Both poems are full of imagination from Jackie Kay as child with the poems containing both negative and positive times in her life. Ryan McDonnell 10CTJ 10a1 ...read more.