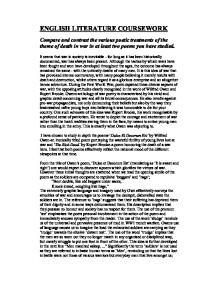 ENGLISH LITERATURE COURSEWORK Compare and contrast the various poetic treatments of the theme of death in war in at least two poems you have studied. It seems that war in society is inevitable - for long as it has been historically documented, war has always been present. Although the tactics by which wars have been fought and won have developed throughout the ages, the outcome has always remained the same - with the untimely deaths of many men. It is this idea of war that has provoked intense controversy, with many people believing it merely results with death and destruction, whilst others regard it as a glorious enterprise and an altogether heroic adventure. During the First World War, poets depicted these diverse aspects of war, with the opposing attitudes clearly recognised in the work of Wilfred Owen and Rupert Brooke. Owens anthology of war poetry is characterised by his vivid and graphic detail concerning war and all its brutal consequences. He also revolts against pro-war propagandists, not only denouncing their beliefs but also by the way they brainwashed na�ve young boys into believing it was honourable to die for your country. One such advocate of this idea was Rupert Brooke, his work recognisable by a profound sense of patriotism. He wrote to depict the courage and excitement of war rather than the harsh realities staring them in the face, by means to entice young men into enrolling in the army. This is exactly what Owen was objecting to. I have chosen to study in depth the poems-'Dulce Et Decorum Est' by Wilfred Owen-an ironically titled poem portraying the wasteful futility of young lives lost at war and 'The Rich Dead' by Rupert Brooke-a poem honouring the death of a war hero. I feel that both poems effectively reflect the national mood of the different viewpoints at that time. From the title of Owen's poem, 'Dulce et Decorum Est' (translating as 'It is sweet and right') ...read more.

"But someone was yelling out and stumbling And flound'ring like a man in fire or lime..." The language is very vivid. The use of the simile comparing the dying man to a man 'in fire or lime' is particularly effective as I can visualise this paralysed soldier clutching at his throat, gasping for air; grappling at Owen, battling for assistance. From this graphic depiction one can feel Owen's sense of helplessness and overwhelming sense of regret, as he looks on unable to help his dying comrade. I noticed that at the end of this line Owen breaks off, as if words fail to describe the full horror of the situation. Owen goes on to relate how it felt actually witnessing such an atrocity: "Dim, through the misty panes and thick green light, As under a green sea, I saw him drowning." 'Dim' and 'misty' recapitulate the swirling poison gas as it further obscures the already limited vision of the soldier. The mans blind panic and agonising movements are compared to someone drowning under water as he does indeed drown in his own lungs. There is possible wordplay on 'panes' as Owen emphasises his pain felt through the panes of the gasmasks. Owen's technique of focussing on one mans individual suffering is highly effective. His pain is intense, personal and touching. There is a time shift in the poem as the doomed soldier revisits the poet's subconscious mind. The image of this has obviously left a lasting impression on Owen as he describes in the line: "In all my dreams, before my helpless sight, He plunges at me, guttering, choking, drowning." The experience infiltrates his dreams, and haunts him. The onomatopoeic words, 'guttering' and 'choking' lend an aural dimension to the poem. They force us to hear as well as envisage the dying soldier struggling to breathe. The mechanical listing of words 'guttering, choking, drowning' emphasises Owen's inability to communicate his feelings and thoughts coherently. ...read more.

Again, the mood is full of triumphalism and the gift of nobleness is highlighted by the use of capital letter 'N'. The poet brings his unusual argument to its logical conclusion that the war has somehow been the salvation, rather than the destruction of our society. The poems concluded that by dying in war the soldiers have eradicated any sense of loss and have accomplished instead the vastly superior destiny of eternal glory. The war, the accounts of their deaths, the fighting and the battles will all be documented and recorded in our history books, in poems and in stories. It will forever form part of our culture, our history. The soldiers' names and memories will be etched into our pasts and will thus shape our future. The poem itself is an act of commemoration for such fallen heroes as 'The Rich Dead'. Of the poems I have studied, my personal preference is by far the work of Wilfred Owen as I feel he represents the reality of war more successfully than his contemporaries do. His poetry may be grim and disturbing but his writing has the effect of personally involving you into the poem. Owen strives to provide a more realistic image of the wholly unavoidable human suffering that war brings. I think the following line from the song "The Green Fields of France" reflects this image accurately when the writer describes his feelings while standing in a World War One graveyard: "To a man's blind indifference to his fellow man, To a whole generation who were butchered and damned" Rupert Brooke's work on the other hand is aiming to paint a pretty picture of the harsh realities of war. Although in theory the romantic principles presented by Brooke may seem attractive, to apply them to real life is na�ve and idealistic. War might bring glory on a wider scale, but to claim that a soldier's needless death in appalling conditions is honourable is simply untrue. War may well be inevitable but it is senseless and can never be justified. ...read more.